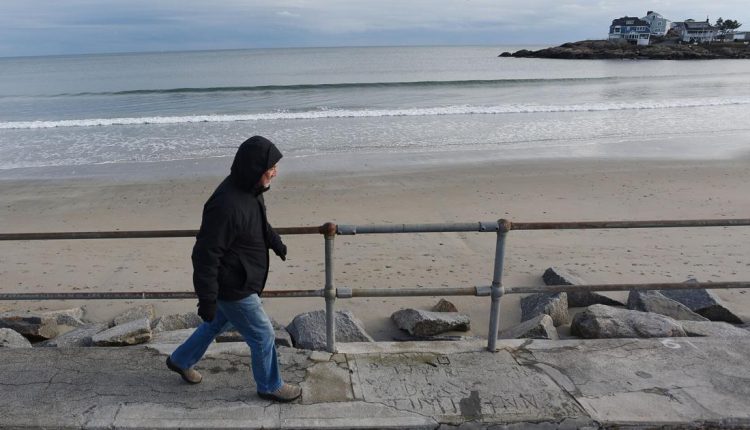 ROCKPORT — Town Meeting on Saturday enthusiastically voted in favor of adding $5 million to the budget for the Rockport Public Works building project.

The potential budget increase now moves to the ballot for Town Election this May for final approval.

The DPW Facility Building Committee is seeking the additional $5 million to cover increased labor and material costs caused by the COVID-19 pandemic. The project’s initial $12.4 million budget was approved in 2019.

The money will be raised through a Proposition 2 1/2 debt exclusion. Residents are expected to see an initial 55-cent increase in their property taxes (per $1,000 of assessed value) by 2026 followed by a slight decrease each following year.

Town Meeting also heard the final report — a year in the making— from the Long Beach Options Committee, presented by Chairman Kenneth Kaiser. The committee was formed by last year’s Town Meeting to research options the town may take when the leases to the town-owned land under the beach’s seaside cottages lapse next year. Now that its research is complete, the citizen-run committee has been disbanded.

“The committee has raised more questions than answered,” Kaiser said. “Based on other seacoast towns that went through similar situations, (Rockport) would benefit from a professional study.”

Such a study, according to the committee, should research “social, legal, environmental and economic implications” of either issuing new leases or selling the town-owned land. Kaiser said the town has already taken steps to apply for a Municipal Vulnerability Preparedness grant to pay for such a study. Applications are due in May.

In the short term, Kaiser said it would “make sense (for the town) to renew the leases for two years or so” as a stop-gap until the study is completed.

The committee did not recommend removing the cottages and letting Long Beach go back to nature, considered the most expensive scenario due to potential litigation from the leaseholders. Selectmen have also spoken out against the “back to nature” option in the past.

Despite this, Town Meeting narrowly approved Article K, 144-108, which calls on selectmen to conduct a FEMA-funded study on replacing the Long Beach cottages with “an ecologically sustainable parking lot and walking paths.”

Town Meeting overwhelmingly supported, 214-50, the non-binding citizens petition Article J, a pledge to get Rockport at energy net-zero by 2040.

Prior to Town Meeting, selectmen voted against supporting Article J. The Rockport School Committee rescinded its previous support of the article as well.

Selectmen Chairman Don Campbell said that while selectmen support going energy net-zero, they believe the article did not include enough information on potential town expenditures.

Dianne Finch, a member of the Rockport Green Community Task Force, pushed back on Campbell’s characterization of the article.

“There’s no costs attached to this article,” she said. “It’s about talking and planning and thinking ahead. Let’s not talk about costs. Let’s talk about what we’re willing to commit to.”

There was a bit of back-and-forth about Article H, which sought to enforce a nine-year term limit for selectmen. A motion was made to change the limit to two consecutive terms, which was ultimately rejected. In the end, the non-binding citizen petition did not get a simple majority, failing 67-143.

I: Balance the fiscal 2021 budget. APPROVED UNANIMOUSLY BY VOICE.

1: Assign an agent and/or other officers for various trust funds. APPROVED UNANIMOUSLY BY VOICE.

A: Accept the 2020 Annual Town Report. APPROVED UNANIMOUSLY BY VOICE.

E: Use $75,000 of free cash to pay for assessor revaluation expenses. APPROVED UNANIMOUSLY BY VOICE.

J: Pledge to get Rockport to net-zero energy use by 2040 (non-binding citizen petition). APPROVED, 214-50, BY ELECTRONIC VOTE.

K: Apply for a FEMA-funded study on replacing the Long Beach cottages with “an ecologically sustainable parking lot and walking paths.” APPROVED, 144-108, BY ELECTRONIC VOTE.

Erik Haula in for the long haul with Bruins – Lowell Sun