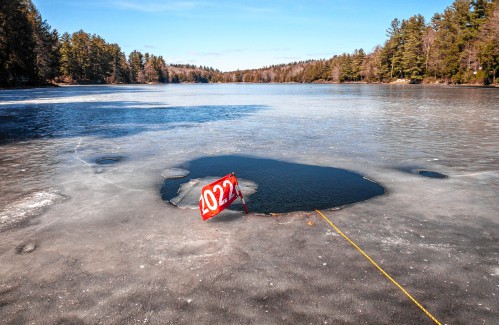 GOSHEN – This year’s Meltdown fundraiser came to an end when the 69-pound block of concrete the meltdown places on the ice of Hammond Pond each year went crashing to the bottom of the pond at 1:16 p.m. on Tuesday.

The meltdown involves people buying $1 tickets to guess the day and minute the block sinks, with the winner being the closest without going over.

Lissa Ganter of Easthampton and Kenn Sinclair of Southport, North Carolina, both guessed March 29 at 1:15 p.m., and thus stand as winners this year.

“Both of these people have been longtime supporters,” said Bob Labrie, founder and organizer of the event.

“He thought he had it in the bag,” Labrie said.

Ganter said that she was sure that someone was pulling a prank on her when she was told she won.

“I was totally amazed,” she said.

Sinclair was also surprised to be named a winner.

“I never expected to win,” he said.

As it stands, 911 tickets were sold and when expenses are subtracted, Ganter and Sinclair are set to split $412.57, which comes out to half of the ticket proceeds.

This year, the fundraiser was raising money for the Williams-Boltwood House Trust, which is trying to turn the historic Williams House into a museum. When proceeds and donations are added together, $819.57 has been raised for the trust by the Meltdown, Labrie said. This number also doesn’t include the donations from the winners’ winnings.

Sinclair also is donating his winnings, all of which will go to the Williams-Boltwood House Trust.

Tickets that were postmarked before the block went down are still being accepted, Labrie said, which may affect the final proceeds. Additionally, those who want to make donations to the fundraiser can still do so, and information about mailing donations can be found at goshenmafire.com/meltdown/.

Labrie said tickets came from around the country and the world this year with four coming from buyers in Australia and 20 from the United Kingdom.

Labrie also said that the generosity of the people who participate in the Meltdown fuels him, including notes he receives about it.

The Friends of the Chesterfield Public Library is kicking off one of its membership drives, and it’s hoping that some of its donations will encourage more people to use the library and become members of the Friends.

“It’s nice to have a group … that can help with some of the projects that we do,” said Carol Recore, a member of the Friends.

Recore noted that the Friends sponsor author talks, contribute to physical improvements at the library and create the town’s phone book every few years. The book contains contact information for Chesterfield residents and businesses.

“The local advertising is very helpful for small business in the area,” Recore said, also noting that a number of older residents are not keen on using the internet.

The Friends also are in the process of ordering passes for a number of local institutions such as Magic Wings Butterfly Conservatory in Deerfield, Berkshire Museum in Pittsfield and MASS MoCA in North Adams. These passes will be available to be checked out of the library and Recore said the hope is the passes will draw attention to both the Friends and the library.

“Please, come to the library and check it out,” Recore said.

There is still time to submit applications to the public art initiative Cummington Reflections, and additional funding for artists also has become available.

Artists have until midnight on April 4 to submit to the contest, and can do so online at cummingtonculture.art/projects-%26-events.

The initiative will see six to eight pieces of public art displayed in Cummington. Additionally, more funding from the Hilltown Vision Fund is available for proposals that engage the community through interactive art projects, including classes and workshops.

Proposals for the Vision Fund money can be separate from or a part of the Cummington Reflections initiative, and inquiries should be emailed to hilltownvision@gmail.com