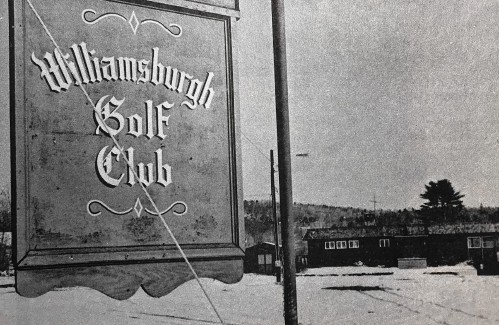 A Look Back: April 5

■The Northampton Lodge of Elks voted 170 to 69 last night to buy the nine-hole Williamsburg Golf Course for $285,000. Purchase of the property hinges on approval of the Grand Lodge of Elks and transfer of the liquor license.

■An eight-point tentative proposal for the introduction of an open campus at Northampton High School was discussed last night by about 40 students, teachers and administrative personnel at a meeting of the Open Campus Committee. The Open Campus program would not include juniors in its first year.

■Security was tight as celebrated writer Salman Rushdie received an honorary degree from Amherst College Friday night. Rushdie has lived in virtual seclusion for close to a decade, ever since the Ayatollah Khomeini of Iran placed a death threat on his head for his novel, “The Satanic Verses.”

■Anne Tatlock, of 16 Ward Ave., Friday confirmed that she has offered to establish an annual award at the Smith Vocational and Agricultural High School to honor outgoing school farm manager Ed Maltby. Today is Maltby’s last as manager after a five-year tenure.

■Northampton residents Nathaniel Jones, 13, and Zachary Dietz, 14, are heading to Florida on April 13, where they will compete in the National School Scrabble Championship in Orlando. They will be facing 150 competitors in the 9-to-14-year-old division for a two-day Scrabble extravaganza.

■The Mind & Life Institute, an organization affiliated with the Dalai Lama that seeks to integrate science and contemplative traditions, has relocated to Hampshire County from Boulder, Colo. The institute’s new office at 4 Bay Road in Hadley has a staff of nine and is seeking to create a research center for visiting scholars near the Amherst College campus.