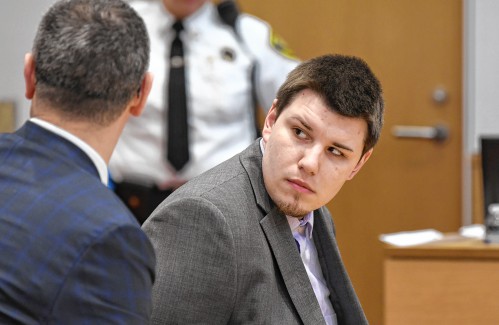 GREENFIELD — A Franklin County Superior Court judge is weighing which communications will be admissible in the trial of Athol resident Keith D. Hamel, who is accused of murder, armed robbery and other charges.

Judge John Agostini on Monday presided over a motion in limine, in which the prosecution and defense argued in favor of or in opposition to redacting certain statements Hamel made via phone calls and letters to his mother, father and a friend. A motion in limine is a request for certain evidence to be excluded from a trial because it is irrelevant, unreliable or prejudicial.

Agostini is expected to produce a written order with his decision on the motion. The information pertains to a DNA profile matching that of the defendant being recovered from the victim’s body.

A trial had been scheduled to begin on Monday, but unforeseen circumstances have resulted in the date being moved to Aug. 22. Hamel is represented by attorney Joshua Hochberg. Assistant District Attorneys Joseph Webber and Jeremy Bucci are prosecuting the case for the state. The three attorneys spent much of Monday’s session sifting through transcripts that contained a considerable amount of foul language and sexual content.

Hamel, 25, is accused of killing 26-year-old Leominster resident Kelsey Clifford in 2019 and leaving her body near the locked gates of the Athol Wastewater Treatment Plant’s entrance, where she was found Nov. 11 with at least 15 puncture wounds to her head and face. Hamel is also alleged to have stolen $400 in cash and a cellphone from the victim after she was dead. He is being held without the right to bail after pleading not guilty to one count of armed robbery, one count of murder, two counts of misleading police and four counts of tampering with evidence.

Agostini had previously denied Hamel’s motion to dismiss the armed robbery charge. Hochberg moved to dismiss the charge on the grounds that the grand jury did not hear sufficient evidence of his client’s involvement in criminal activity to warrant probable cause to believe he had committed armed robbery. The state alleges that Hamel, who had a girlfriend, killed Clifford, who had a boyfriend, to get access to her cellphone to delete evidence of a sexual encounter between the two. In his order, Agostini explained that a court must dismiss an indictment in which the grand jury receives no evidence of criminality on the part of the accused.

As background, Agostini wrote in September 2021, there is evidence that, during the period that the murder likely occurred, Clifford was carrying a considerable amount of cash from her job as an exotic dancer. She always carried her cellphone and, on the day before the murder, a picture of her was posted to Facebook using her phone. She was generally unfamiliar with Athol, the judge wrote.

Clifford woke up in her boyfriend’s apartment, where she was staying, at 10:30 p.m. on Nov. 10, a few hours before the murder, and realized that he and another man had left the apartment to party with Hamel and Hamel’s girlfriend at the defendant’s apartment, according to Agostini.

“Angry conversations then ensued regarding this event,” Agostini wrote.

“In fact, the defendant admitted to the police that he did not have money that night except for $50 from a sale of marijuana,” Agostini wrote, noting that Clifford was typically paid in cash in her line of work.

Between 7 and 8 a.m., Hamel dropped off $18 to a man to repay him for money he had borrowed. Later that day, Agostini wrote, the defendant had at least $200 on his person to purchase cocaine.

The defendant’s sweatshirt, which was found between the crime scene and his apartment, had Clifford’s blood and Hamel’s DNA on it. Also, saliva and DNA matching that of the defendant were recovered from the victim’s body. Hamel’s and Clifford’s romantic partners were reportedly unaware of any sexual activity between the defendant and the victim during that time period.