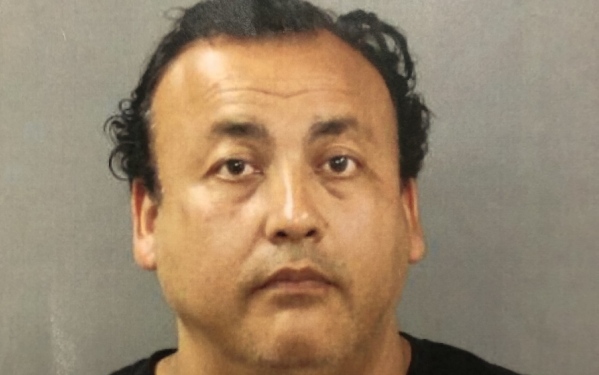 Orlando Robles was indicted by a Bristol County Grand Jury last week on the following charges:

“I’m very pleased to announce this defendant was indicted by the Grand Jury for a series of sexual assaults that put the community at fear due to the violent and random nature of the attacks. This investigation once again highlights the efforts of our Cold Case Unit, working cooperatively with New Bedford Detective Stephen Taylor, to solve these very serious crimes,” District Attorney Quinn said. “Our Cold Case Unit will continue to review and investigate homicides and violent sexual assaults that remain unsolved by utilizing all investigative means, including advanced DNA technology.”

In June and July of 2013, four women were brutally assaulted in New Bedford.

In the first incident, on June 7, 2013, at approximately 10 PM, a 19-year-old woman was walking on County Street near Weld Street in New Bedford when a man in a dark blue pickup truck passed her and then pulled over in front of her. The driver called out to get her attention and asked her if she wanted a ride. The man told her he was driving in the same direction she was walking and was going to pick up his daughter. Thinking she could trust him, the woman got in the truck. The man did not stop where the woman was going but proceeded to drive to various other parts of the north end of New Bedford and into Dartmouth, including the airport.

At one point he stopped and said: “Time to get out, I need to see.” Sensing something was wrong, the woman tried to get out of the car, but the man pulled her back in. He put his hands around her neck and began to strangle her. He tried putting his hands in her pants but was unable to do so. He punched her in the head multiple times. Finally, the woman was able to break free, and exit the truck. The man continued to attack her, holding her down on the ground while she pleaded with him to stop and he continually told her “Shut up, I told you to shut up!” The assailant ultimately released the woman, got up, and drove off in his truck. After she was able to get the help of the police, they noticed numerous injuries consistent with her description. She provided them with some information regarding the man and his truck, and police were able to corroborate aspects of what she said by observing surveillance video, but they were initially unable to develop any leads or identify any suspects.

In the second incident, on June 29, 2013, at around midnight, a 37-year-old woman, who had been out for the evening in Dartmouth, Fall River, and finally New Bedford, returned home around midnight. She had called her son shortly before leaving Cork Win and Tapas in New Bedford, the last place she had visited. After pulling into her driveway on Norwell Street, she reached over for her purse when the door to her car opened. Initially thinking that it was her son (whom she had called to ask to leave the front door open), she quickly realized she was under attack and a man had grabbed her face with two hands, putting two fingers in her mouth and grabbing her tongue, preventing her from yelling. As they struggled, the man continued to push the woman back into the car and put his fingers inside of the woman’s vagina. This caused the woman to fight even harder, and she was able to strike back at the man by poking him in his eye. The man retreated and ran away. At this point, the woman’s son had heard the commotion and the two of them chased the man to stop him, but he had gotten away.

In the third incident, on July 7, 2013, a 30-year-old woman was assaulted near her home on Woodlawn Street. She had returned home after spending some time at the 908 Club in downtown New Bedford and then driving to the McDonald’s on Dartmouth Street. When she exited her car, she could see a person walking in the street toward her. She turned to get something from the car when the person, a man, grabbed her from behind. He grabbed her by the throat and pushed her into the car. He then put his hands inside of her shorts and put his finger inside of her anus. At this point, the woman bit the man’s finger, at which point he stopped attacking her and ran away in the direction of Brock Avenue.

After the third assault, police were able to recover surveillance footage from a video camera that had captured a man running away from Woodlawn Street towards Brock Avenue at precisely the time the woman had indicated. He was observed to be running and getting into a truck, which appeared to be a small pick-up truck. Investigation revealed that the truck’s shape and size was consistent with a late-model Ford Ranger, and also consistent with the vehicle described by the woman in the first incident.

In the fourth incident, on July 13, 2013, around midnight, a 31-year-old woman was walking from Cork Wine and Tapas to her car. She sat in her car and began having a phone conversation with her husband. While sitting there, a man approached her, punched her in the face twice, and began to strangle her. He then reached into her pants and inserted his fingers into her vagina. After leaving his fingers there for several moments, he fled the area.

After the fourth incident, police patrol in the downtown area was enhanced substantially and detectives worked to collect all relevant surveillance video from local businesses. By reviewing the footage, police were able to identify what appeared to be the same truck, a late-model blue Ford Ranger, circling the area of Cork’s immediately before the assault on the woman, and departing the downtown area immediately after. The resolution and clarity of the videos, as well as the ability to synchronize them to show the suspect vehicle’s movement, was much greater among these videos, and police were able to identify specifically the type of vehicle they were looking for. Additionally, based on commonalities between the descriptions of the suspect by the four women, police were looking for speciffic physical characteristics in the suspect.

On July 14, 2013, police engaged in saturation patrol in the downtown area. During the evening hours, what appeared to be the same truck from the video collected the previous night (and the same truck from the Woodlawn Street/Brock Avenue incident) was observed taking essentially the same route that it had taken the night before around the time of the fourth incident. The truck, a blue Ford Ranger, had Texas license plates. The operator, Orlando Robles, was followed briefly, observed to take some evasive action and to commit a traffic infraction, and ultimately stopped.

Robles was brought back to police headquarters where he was interviewed by Detective Stephen Taylor, the initial investigating officer on the case who has remained with the case throughout its history. During his interview, Robles was told only that there were women complaining of being harassed and asked whether he had any knowledge of or involvement in this. Robles denied it. He was not given information as to why his vehicle, or his movements inside of his vehicle, matched the descriptions of the victims. During his interview, Robles stated that he was a resident of Rockport, a small town near Corpus Christi, Texas, and that he was in the New Bedford area for work as a scallop fisherman. The interview ended amicably, and Robles indicated that he would be available for further questioning should the police wish to contact him.

As police continued to investigate the matter, they went to the address that Robles had listed in Dartmouth as his residence. His landlord indicated that he had lived there, but that he had left abruptly in the middle of the night a few nights before, taking all his belongings and asking her to forward his deposit to a location in Texas. It appeared, based on her description, that he had departed within hours of the police interview on July 14, 2013. Police observed that after Robles left for Texas, the spate of sexual assaults in New Bedford immediately stopped.

In late October of 2013, Detective Taylor contacted law enforcement in the Corpus Christi area to see if Robles had returned there, and to alert them of the ongoing investigation. He also asked whether they had any recent unsolved sexual assaults and passed along information about Robles. The Corpus Christi police indicated they had had four similar incidents, one in August and three in September.

In one of the September 2013 Corpus Christi incidents, a 22-year-old woman was followed by a man while she was driving. He told her there was something wrong with her car and he could help. When she got out, he assaulted her, grabbing her, putting his fingers inside her vagina, and slamming her face to the ground. She was able to fight back by striking him in the upper body with her car key. He was wounded, retreated, and quickly drove away. Although that woman was unable to identify Robles from photo arrays in which he was present, the car key was tested for DNA, and ultimately resulted in aa CODIS DNA match to Robles. Robles was arrested, charged, tried, and ultimately convicted of that offense and an indecent exposure that took place several weeks later, and is currently serving a 20-year sentence in Texas in the Houston area.

During the ensuing years, New Bedford investigators and the investigators with DA Quinn’s Cold Case Unit continued to review the Corpus Christi cases along with the New Bedford cases. The similarities between all the cases became more striking: in almost all cases, either a deceitful initial contact or a rapid approach by a stranger, followed by the almost immediate use of violent force, followed by an attempt to rape the woman either by penetrating her vagina or her anus with a finger or fingers. In all cases, the man fled after effectuating the crime or after the victim fought back, and in most cases, the man’s physical characteristics did not enable victims to identify him.

On March 30, 2022, the Bristol County Grand Jury voted true bills relating to all of the four incidents from 2013. The Bristol County District Attorney’s Office will seek to lodge a warrant against Mr. Robles requiring him to answer to these charges prior to the completion of his sentence in Texas. He will become parole eligible in the Texas case sometime in 2023.