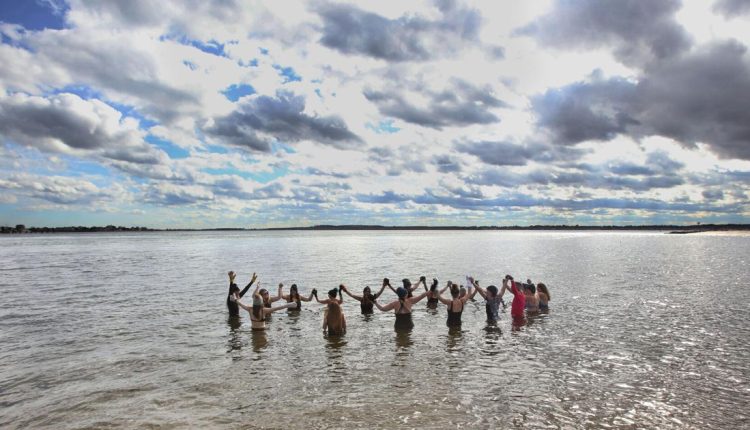 Braving the cold with a refreshing dip | News

SALISBURY — A group of local women and men known as the Ebb and Flow Collective have been braving the icy-cold waters off Salisbury Beach State Reservation for the past year and a half and they would love to have more people join their ranks.

“I have had a number of experiences where I am sitting in ice floes, which is actually pretty cool. I love the sound of the crunching ice. It is like nature’s music,” she said.

Soon Iappini began to “crave the cold” and she posted her experiences and an invitation to others to join her on Instagram.

Iappini and Ricci formed the Ebb and Flow Collective last January. The group gathers at Salisbury Beach State Reservation every Sunday morning and Friday afternoon and typically sees more than 40 women (and some men) hitting the water together, no matter the weather.

“We have gone out in 40 mph winds or in a storm and we still go, no matter what. Some days are harder than others but this is about conquering that fear,” Ricci said.

“When I go into the water, I think about controlling my body and remaining calm and putting myself in a headspace that reflects that,” she said. “When emotional stressors come into my life now, I feel that I am able to channel that water feeling and I have a better threshold for stress.”

Libby DeLana, a Newburyport resident and author of “Do Walk: Navigate earth, mind and body. Step by step,” got a head start on cold dipping off Plum Island with her son in mid-2020.

“I had a narrative ever since I was 13 that I hate the cold, I was always the one wearing the puffy coat in the middle of June,” she said.

DeLana said submerging herself in near-freezing water was a good way to change her internal narrative.

“I was tired of saying that I hate being cold because we live in New England and that is sort of ridiculous,” she said.

But Plum Island can be a difficult place to relax in the water, and DeLana said she was happy to join other like-minded women when Ebb and Flow was formed.

DeLana said Ebb and Flow helps people conquer their fear of the cold, but it is much more about having a good time with members often bringing inflatables and having submerged tea parties together.

“Certainly, there is courage and bravery, which is a big piece of it. But we also have a hell of a lot of fun together and we laugh and laugh and laugh,” DeLana said.

Although she admitted she hears a small voice in her head reminding her of how much she hates the cold every time she heads in for a dip, DeLana said it is her belief in herself and her community that gets her in the water every time.

She also said those who are interested in joining the Ebb and Flow Collective can go to its Instagram page at www.instagram.com/ebb.and.flow.collective/.

“You don’t have to go in if you don’t want to the first time, just showing up is good enough,” DeLana said. “A lot of us who have been dipping for a long time are happy to hold your hand when you go in. You’re not alone in this, we are there to support you.”

Amesbury Mayor Kassandra Gove was an early member of the collective and said in a text message that it has been an “amazing experience and opportunity” to meet highly accomplished people who love their community and come together at the beach.

“No membership required with this group. Just the guts to show up and get in the water,” Gove wrote.

DeLana thanked Iappini and Ricci for forming the collective and also credited the group’s great sense of community for keeping people coming at all times of the year.

“If you need a hand as you walk in the water, we are here for you,” Iappini said.

Cold-water plunging is not an unusual activity, according to Ricci, who said there are plenty of similar groups doing the same thing around the world.

She also said the natural high a cold-water plunge produces has kept her and the rest of the collective coming back for more.

“Those endorphins really kick in once you get into the water. We’re kind of cold water junkies and, if you are going to be addicted to anything, I think this is a wonderful addiction,” Ricci said.