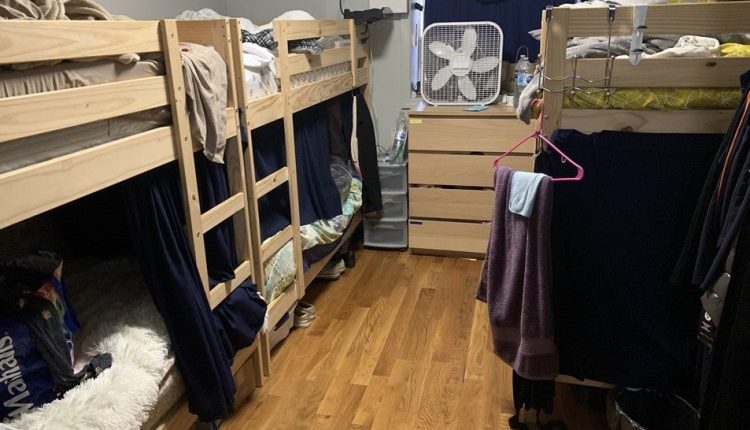 The Boston Inspectional Services department found that, in what was supposedly a condemned garage on Geneva Street in East Boston, there was actually a two-bedroom living unit.

And there was enough space there for 20 separate beds to house 20 people, believed to be flight attendants crashing in between flights, officials said.

“This unit was constructed illegally, stored hazardous material, missing smoke detectors and no 2nd means of egress,” a tweet from the department said.

In a separate tweet, the department notes that permitting is required before something is built.

“Converting a garage to residential units without going through proper procedures is a violation & more importantly unsafe for the occupants,” the department said. “Hazardous & flammable material must be stored properly.”

Photos of the unit show a row of bunk beds with possessions thrown on top. There’s also what appear to be stacked paint cans, and a plastic container typically used to store gasoline.

An inspection of the property was performed on April 5. A condemnation hearing afterward determined that the building is “unfit for human habitation,” according to a Notice of Decision from Inspectional Services.

“The dwelling unit, which is located in a commercial garage facility, has not been permitted by the City of Boston for residential use,” the decision says. “Kitchen and bathroom fixtures have been installed without the necessary permits, no approved second means of egress from the residential space and missing smoke/carbon monoxide detectors from the common area.”

The owner reportedly said he didn’t know the permits were required.

The occupants, of which there were 19 at the time, were thought to be flight attendants, according to WHDH; they were said to be paying $300 a month to stay there.

“They live there, they sleep there,” city inspector John Meaney told the news station. “They eat there. So it’s residential, it’s illegal and it’s dangerous. On paper, it’s a garage. They had somebody construct an apartment above the garage, which is illegal. No permits pulled.

“What you really had was a death trap. I don’t think any of them knew it.”

The building could be removed from condemnation if a licensed contractor is hired to bring the property under code, along with reports of the work and a schedule of repairs, according to the decision. The owner must also request an inspection from the city, among other conditions.

A reinspection is slated for next Thursday to make sure the property is in line with the city order.