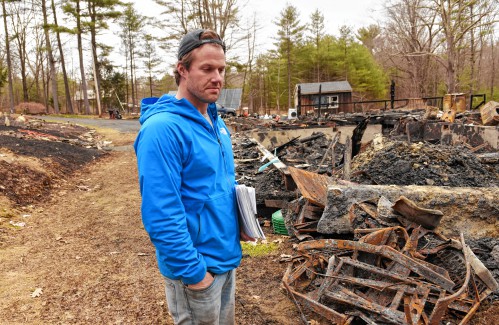 NEW SALEM — The Fire Department and state troopers assigned to the state Fire Marshal’s Office are investigating the early-morning fire that destroyed a home at 17 Whitaker Road on Sunday, displacing a man and his dog.

Jake Wark, public information officer with the state Department of Fire Services, said the blaze was reported by a neighbor shortly before 5:10 a.m.

“The determination of a fire’s origin and cause is always directed by the complexity of the fire itself,” Wark said of the investigation, noting he doesn’t have “an exact timetable” for when a cause may be determined. “Every (fire) is a bit different.”

Resident Brendan Kuntz, 34, said he was at a store activating a new cellphone Sunday morning when his stepfather called to tell him about the fire. Kuntz, who said he has lived in the house for roughly 2½ years, said he had been on an overnight trip with his dog the night before.

New Salem Fire Chief Joe Cuneo said his department was joined by firefighters from Wendell (where he is also chief), Shutesbury, Erving, Orange and Montague Center, and the ones from Pelham, Royalston and Petersham were called later for tanker support. Cuneo also said AMR Ambulance was at the scene on standby.

“The building was essentially on the ground upon arrival,” the chief recounted, adding that firefighters later sifted through the debris in search of anyone who may have been inside.