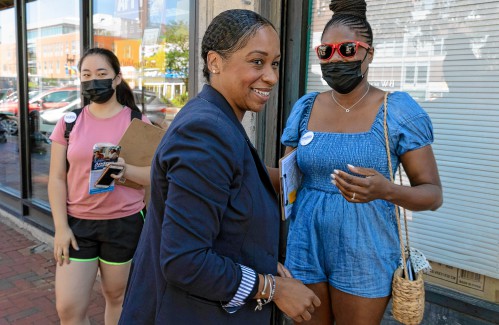 WORTHINGTON — Andrea Campbell, who is seeking the Democratic nomination for attorney general, will be the next guest of the Town Democratic Committee’s Sundays with the Candidates series.

“Many of the struggles that residents are dealing with right now I’ve lived myself,” Campbell said.

Campbell’s appearance will take place over Zoom at 2 p.m. this Sunday. It is open to residents of any community, and those interested in attending should email Worthingtondem@gmail.com with their name and town.

A former Boston City Council president and an attorney in the administration of former Gov. Deval Patrick, Campbell grew up in public housing in Boston. Her mother died when she was 8 months old and her father and brothers were in and out of prison, with her twin brother dying 10 years ago in the custody of the Department of Correction at the age of 29.

Campbell said she has been intentional in her campaign about getting out to the western part of the state. After kicking off her campaign in Boston on Feb. 2, she went to Worcester and Springfield that same day. She followed this up later by visiting Pittsfield and surrounding communities.

Campbell said that she’s interested in hearing from people about what they’re struggling with, and in ensuring prosperity in every ZIP code. And she said the office can help people with issues such as housing and substance abuse as well as daily concerns.

Campbell also noted that she has worked as a general counsel at a regional planning agency. “I know regional equity is a major issue,” she said.

Campbell said her attorney general’s office would be ready to take action on issues including wage theft, foreclosures, substance use disorder, and climate change and environmental issues.

“It’s looking at a holistic way of helping a family,” Campbell said, noting that a family could be one person or 25.

Campbell has been endorsed by more than 90 elected officials.

“When I was on the City Council I engaged with various electeds in the work,” she said. “Many of these elected officials that I’ve worked with in the past have endorsed me in the race.”

“She’s known me for years,” Campbell said of Olberding.

A married mother of two, Campbell lives in Boston with her family.

5 things to do this weekend