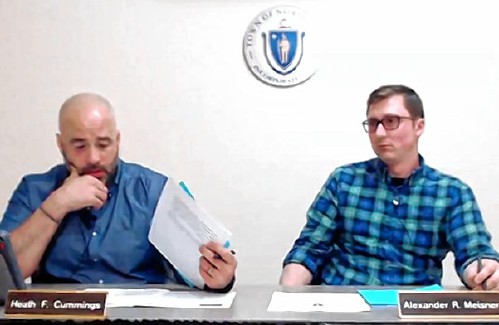 NORTHFIELD — The Selectboard chair plans to develop a proposal on increasing the board’s stipends that could be presented to Annual Town Meeting voters.

The topic, initially introduced by Chair Heath Cummings during a Feb. 8 meeting, was revisited Tuesday, following a March 30 Finance Committee meeting in which members voted unanimously not to recommend the proposed increase to Selectboard stipends. The Finance Committee also opted to have the increase considered in an individual Town Meeting warrant article, rather than part of the omnibus budget.

“They wanted to have the town weigh in on it, which I totally agree with,” Cummings said Tuesday.

Cummings, along with Selectboard member Alex Meisner, have emphasized the amount of work the role entails, extending beyond biweekly meetings, as well as the gravity of the decisions the board must make, as justification for the increase. Member Mary Bowen has also voiced support for the change.

“I think now we’re in a rhythm and a style that will make Northfield government function correctly,” Meisner said Tuesday, noting he has been on the board for about four years and feels Cummings’ proposed increase is fair. “We are in long meetings, we have hefty agendas where we’re making a lot of decisions – fiscally, policy.”

As in February, however, Bernard “Bernie” Boudreau said he is against a stipend increase.

“I’m a volunteer type guy. Getting anything is great to me,” Boudreau said. “I look and there’s a lot of things in the town that are going to cost a lot of money in the future,” referencing the public safety complex, in particular. “I’d rather the money be put toward things like that.”

Cummings also spoke to an “imbalance” when it comes to funding requests, referencing the more than $4 million assessment Northfield pays to the Pioneer Valley Regional School District. Likewise, he noted the Finance Committee’s recommendation to support the Planning Board’s request for stipends, which is also expected to be an article on the Annual Town Meeting warrant. The five Planning Board members do not currently receive stipends, and requested $6,000. On March 30, the Finance Committee voted unanimously to recommend that the board receive $4,000 – $1,500 for the chair, $1,000 for the vice chair and $500 for the remaining three members.

“I have kind of an issue with the way this has been approached,” Cummings said of the Finance Committee’s hesitance to consider an increase to the Selectboard stipends, compared to other funding proposals that have received its support. “It doesn’t seem like there has been any objectivity to it to discuss comparatives, really hear us out, have much discussion.”

While the Selectboard and Finance Committee have another joint meeting on the budget and Annual Town Meeting warrant recommendations on Monday at 6 p.m., board member Barbara “Bee” Jacque appealed to Cummings to firm up a proposal justifying the requested increases. She suggested the proposal include information such as the number of hours of work per week the Selectboard role entails, both in meetings and at home; what wage that amounts to per hour; what added responsibilities the chair holds; and what the average stipend is for a Selectboard member in Franklin County. The Selectboard has been considering data from the Franklin Regional Council of Governments (FRCOG), which releases an annual wage and salary survey, and had also tasked Town Administrator Andrea Llamas with finding stipend information for towns across Massachusetts with similar populations to Northfield.

“Quite frankly, with percentage increase, which is where the discussion ended up at the last meeting and also with the Finance Committee, the percentage sounds huge,” Jacque pointed out. “If there’s a proposal with, ‘Here’s what all the other towns do that we think are relevant,’ including a couple on the cape because they’re similar sized, I just think that would be helpful.”

Jacque said she feels it’s “always harder to get a proposal across to people if it’s only focused on one factor,” such as percentage increase, but that information on responsibilities and comparisons would be useful to voters.

“Those are all points that people can absorb and appreciate,” she said.

Cummings agreed to draft a proposal in time for the next Selectboard meeting, as the town approaches its deadline to firm up the Annual Town Meeting warrant articles.

“If we do decide we want to add it (onto the warrant) and leave it up to the voters, we’ll have a proposal that can sway us in one direction or another,” he said. “If we as a board feel like we’re comfortable presenting the data and the information in that proposal, whatever dollar amounts we decide on, then I say we go for it and just leave it up to the voters.”

“You may not get my support for an increase,” Boudreau chimed in, “but I’ll support you putting data out for the voters. … I’m not against letting them decide.”