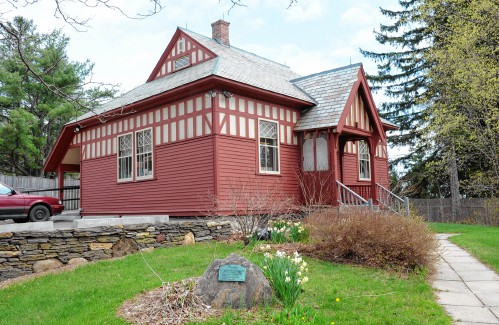 The Recorder – Shutesbury gets state’s OK for new library

SHUTESBURY — Shutesbury can pursue a new library to replace its 120-year-old building under a new state program that will pay for three-quarters of the construction costs.

A decade after the town was forced to relinquish a grant from the Massachusetts Board of Library Commissioners when voters rejected a Proposition 2½ debt-exclusion override, commissioners in a virtual meeting Thursday afternoon chose Shutesbury to participate in the Small Library Pilot Project, a new initiative announced last May.

The town plans to build a new library at 66 Leverett Road, a 22-acre site a short distance from town center, where library operations have been inside the M.N. Spear Memorial Library, a cramped 768-square-foot building with no running water that opened in 1902.

Shutesbury beat out the only other town competing for the funding, the Berkshire County town of Otis. Town officials will bring the project to annual Town Meeting in May to seek the local funds needed.

Lauren Stara, a construction specialist for the state library board, said the pilot program requires that the chosen town accept or decline funding by the end of June. “We want this project to be on a pretty accelerated timeline,” Stara said.

If Town Meeting approves the project, Shutesbury will then hire a designer to undertake the next aspects of the work.

Shutesbury’s selection came after officials completed an 85-page Library Building Program and did extensive consultation with the state’s library construction specialists, Stara and Andrea Bono-Bunker. A review team made up of four independent reviewers then examined the contents of the program submissions, ranking Shutesbury’s higher than Otis’.

“Good luck to Shutesbury as they get into their Town Meeting,” Commissioner George Comeau said.

The Small Library Pilot Project was created for communities of 2,000 or fewer residents that have not yet been awarded construction grants. Stara said the rationale was that the state hasn’t been able to offer many such grants in smaller, more rural towns.

“The intent of this project has been under consideration for many years,” Stara said.

When Shutesbury voters nixed a $1.4 million override for the $3.5 million project in 2012, that was for a building of between 5,500 and 5,800 square feet. In the current building environment, a building of similar size might cost $8.25 million to $8.7 million.

“It is sobering to see these construction costs, at the very least,” Bono-Bunker said.

Shutesbury has already set aside more than $500,000 for a new library building.

Both library construction specialists said they wished both Shutesbury and Otis could have proceeded.

“What a pleasure it was to work with both communities,” Bono-Bunker said.

“It breaks my heart a little we have to pick one,” Stara said.

A Look Back: April 9