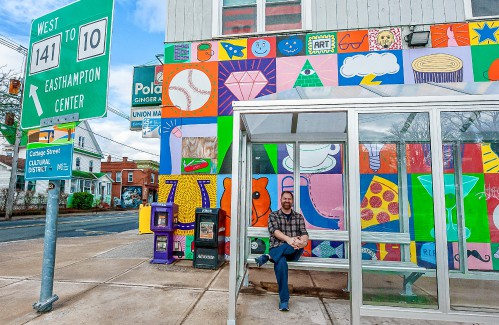 Easthampton’s 1st film festival to debut in late May

EASTHAMPTON — The city’s burgeoning arts scene is about to get a new addition next month when its first-ever film festival makes its debut.

For its inaugural event May 26-29, the Easthampton Film Festival will showcase independent films of up-and-coming filmmakers from all over the world at multiple venues throughout the city, according to the festival’s founder and organizer, Chris Ferry.

A native of Parkersburg, West Virginia, Ferry moved to Easthampton from New York City with his family in 2020.

“My best friend from junior high (in West Virginia) moved here and we loved to visit him,” he said. “We fell in love with Easthampton. It’s a jewel of a town here.”

Ferry, who is an actor and producer known for the 2006 thriller “Salvage” and 2009 comedy “London Betty,” has produced and participated in making several independent films. Eager to engage with the already-established community of artists and musicians in Easthampton, he connected with local filmmakers. Northampton has previously hosted a film festival, but Easthampton has never hosted one, Ferry said.

“I figured, if you don’t see the thing you want, build one,” he said.

With help from his childhood friend, Jason Johnson, who works in alumni relations at the University of Massachusetts Amherst, and a group of volunteers, the festival has come together.

Ferry utilized FilmFreeway, a digital platform that allows filmmakers to submit their films to hundreds of film festivals all over the world, to collect film submissions. He also relied on word of mouth, reaching out to area filmmakers and announcing on social media that he was seeking submissions. Ferry hopes that this festival will become an annual event.

In total, he said he received 77 submissions and ultimately narrowed that down to 33 films.

“It’s all excellent, quality stuff … While we have an international element with films from Argentina, Canada, Finland, India, Iran, Spain, Syria and UK, there’s also with a particular focus on celebrating regional talent and themes, including Belchertown, Feeding Hills, Hadley, Holyoke, Northampton and Wilbraham,” Ferry said.

Among those showcasing their work at the festival is Hadley resident and Pioneer Valley Performing Arts Charter Public School film teacher Melissa McClung. Her short film, “All the Marbles,” is about a girl and a marble that save the world from total destruction, and stars Louis Sarrick of Easthampton and Lucia Dingo-Early of Amherst.

“All the Marbles” was inspired by “The Star,” an 1897 apocalyptic short story by H.G. Wells, and includes animation and a video collage. It will make its debut at the Maryland Film Festival in Baltimore before its screening in Easthampton.

“I’m thrilled to be accepted into the fest,” McClung said. “This film has been a long time coming. I wanted to be able to show it to a live audience, and it will be great to show my work with locals that will recognize the places it was filmed.”

The Easthampton Film Festival will run from Thursday, May 26, to Sunday, May 29. The names of all of the films and a brief description is available at easthamptonfilmfestival.com/program.

The formal schedule of the screenings is still being finalized, but the venues over the course of the four-day event will include Abandoned Building Brewery, located in The Brickyard of the Keystone building at 142 Pleasant St.; New City Brewery, located in the Paragon Arts & Industry Building at 180 Pleasant St.; Marigold Theater at 84 Cottage St.; and Luthier’s Co-Op at 108 Cottage St. Some question-and-answer sessions with filmmakers will follow screenings.

With the exception of an all-ages, family-friendly screening at 11 a.m. on Saturday, May 28, at the Marigold Theater, Ferry said the films are intended for mature audiences.

The number of tickets available for each screening is limited, based on each venue’s capacity.

Tickets must be purchased online in advance, and are available at easthamptonfilmfestival.com. Tickets are $5 per screening.

MBTA rail service returns over drawbridge on May 23 | News