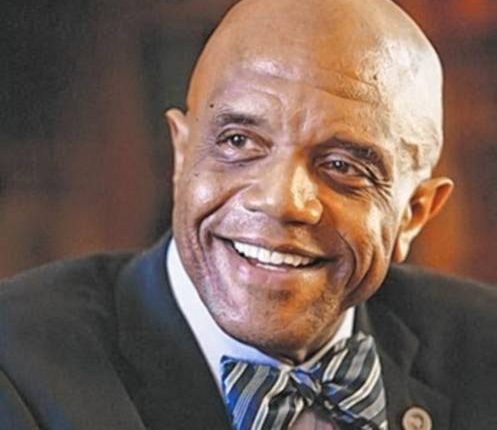 AMHERST — In his 2021 memoir, “I Had No Idea You Were Black: Navigating Race on the Road to Leadership,” Ronald Crutcher, then president of the University of Richmond in Virginia, recalls giving a speech in Washington, D.C., in 2020 about the progress this traditional Southern school had made in recent years in becoming more inclusive.

But within just two days of that speech, he wrote, a series of ugly incidents unfolded on campus. Among them: A Black student found the N-word scrawled outside her dorm room, three white sorority sisters tore down a poster for an event produced for Black students, and someone wrote “terrorist” on the nametag of a student from Afghanistan.

It was a reminder, Crutcher wrote, that much work is still needed all across the country to bridge racial and political divides — something he’d been trying to do for decades.

That’s a message Crutcher will bring to the University of Amherst Massachusetts on April 20 when he speaks at an event hosted by the school’s College of Humanities and Fine Arts and the Isenberg School of Management. The free talk, “You Didn’t Hear a Word I Said: The Critical Role of Conversations Across Difference in a Democratic Society,” takes place in the Isenberg Hub at 7 p.m.

Crutcher, 75, who was president of the University of Richmond from 2015 to 2021 and continues to teach music there, has had a long career as a cellist, music professor, and senior administrator at various higher education settings; he previously was president of Wheaton College in Norton, south of Boston.

Raised in Ohio by parents who did not finish high school, he won a musical competition in Cincinnati at age 17 and later became the first cellist to receive a doctorate in musical arts degree from Yale University. He’s been a cellist for almost 40 years with the Klemperer Trio, an acclaimed classical music ensemble that has played across the country.

But Crutcher has also devoted a good part of his professional life to finding ways to break down barriers between people, using some of his own experiences as a Black man navigating life in a society dominated by whites; he was the University of Richmond’s first Black president.

Cross-cultural dialogue, he says, is becoming ever more critical if the U.S. is to preserve the fundamental principles of democracy.

“In an increasingly polarized world, it has become almost impossible to have authentic conversations across different perspectives from race and gender to politics and ideology,” Crutcher said in a statement.

“The vigorous debate of competing ideas has been an essential component of well-functioning democratic societies for centuries,” he noted. But today, he says, “the various factions not only congregate in like-minded bubbles … [they] even vilify those in the opposing bubbles.”

In his last year at Richmond U, Crutcher was caught up in these debates himself when the school’s board of trustees decided two campus buildings would continue to be named after past school leaders who had ties to slavery and segregation. That decision sparked anger among many students and faculty (though the names of historic Black figures were added to the buildings in question).

Crutcher, one of just three nonwhite members on the board of trustees at the time, told The Washington Post he preferred that the university preserve this part of its checkered past as a way of “grappl[ing] with the complexities of our history in ways that we’ve never done before. It will get messy when you’re honest and you’re telling the good, the bad and the ugly.”

Crutcher’s April 20 talk will explore these and other issues as well as the role of higher education in preparing students to uphold democracy. Crutcher will also draw from his life experiences, including meeting Coretta Scott King when he was a young musician. He’ll sign copies of his memoir afterward.

You can register for the talk by visiting the College of Humanities and Fine Arts website at umass.edu/hfa/ and following the link for “events.”