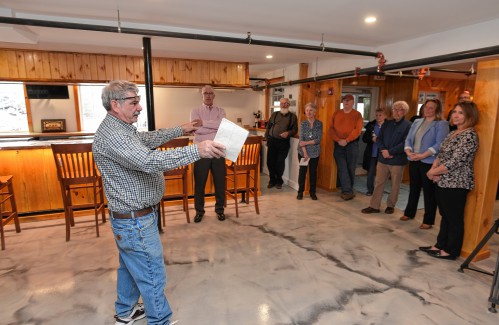 State Sen. Adam Hinds and state Rep. Natalie Blais visited the construction site of the historic Sweetheart Restaurant in Shelburne, following by Clessons River Farm, the lone dairy farm remaining in Buckland. Joseph Rae, the Sweetheart’s owner, spoke about his drive for revitalizing the site’s grandeur and allowed invited guests to tour the building, while Melissa and Adam Griffin showed the lawmakers innovative technologies they’ve integrated into their dairy production.

Kevin Parsons, Rae’s friend and lawyer, explained how Rae approached him years ago with the idea of purchasing the Sweetheart and breathing new life into it, seeing its potential without having much of a specific plan.

“And, so, he believed in it right from the start,” Parsons said in the building’s lower-floor pub, where construction is nearing completion. “And I tell a number of people I think that he’s like our Kevin Costner in ‘Field of Dreams’ — he’s going to build it, and they’re going to come.”

Rae went on to thank the local contractors and tradespeople who have worked on the renovation. He told Hinds and Blais that Massachusetts historic rehabilitation tax credits have been a big help.

Gail Hall mentioned how in the late 1940s and early ‘50s, she and her sister would accompany their parents and grandparents and pass the Sweetheart while driving from Fitchburg to North Adams to visit Hall’s great-uncle and great-aunt.

“Their curiosity would be peaked when we came by here,” she told a crowd of guests, adding that her family sold their Fitchburg home in the early ‘50s and purchased the Sweetheart, which had been closed for about 20 years after opening as a tea room in 1916. She lived and worked on the property until she got married in 1967. The following year, she explained, the building was devastated by a fire, with her parents and their dogs owing their lives to an anonymous man who pounded on the door at roughly 6 a.m. to alert them to the blaze.

Hall said townspeople displayed the definition of community by helping close the roof so rain wouldn’t get in and by offering the owners a house to live in until the Sweetheart reopened at the corner of Route 2 and South Maple Street. Hall’s parents sold the building in the 1970s.

Rae bought the Sweetheart for $220,000 in 2015, when it was sold by the estate of Mauricia Alvarez, who died about eight months after purchasing the empty white building.

Parsons said the renovation is a $2 million project and thanked Greenfield Cooperative Bank for having faith in the endeavor in the middle of a global pandemic.

Hinds, D-Pittsfield, and Blais, D-Sunderland, each spoke briefly to voice their enthusiasm for the revitalization project, commend Rae for his efforts, and thank Hall for her touching tribute to her parents and building.

Renovations are nearing completion on the three-floor, 15,000-square-foot site. The main banquet room, bar area and kitchen are still under construction, with completion anticipated for mid-summer. Rae said there are four rooms on the third floor he plans to rent through Airbnb, an online marketplace for lodging.

Hinds and Blais then traveled to 253 Ashfield Road in Buckland to tour the town’s only remaining dairy farm.

The property is owned in equal parts by Paul and Judy Willis and their daughter Melissa Griffin and son-in-law Adam Griffin, with Melissa taking increasing ownership of the business. The family showed Hinds and Blais the dairy operation, which includes a robotic milking system made by Dutch company Lely, which Adam Griffin also works for.

Adam Griffin explained the farm’s roughly 55 cows are trained to visit the “Lely Astronaut” two to three times a day. The machine scans a collar on their neck to identify the animals and uses a sensor to detect their udder teats and begin milking.

The sophisticated machine has a screen that includes each cow’s health and milk quality information, as well as the quantity of milk being produced and how much will likely be produced in a milking session. It also measures the milk’s fats and proteins, and dispenses grain pellets to meet each cow’s specific nutritional needs.

Adam Griffin said there are likely 5,000 Lely milking robots throughout North America, with roughly 4% of dairy farms using this level of technology.

“So there’s a lot of room for growth,” he said.

Judy Willis explained the farm received a $150,000 state grant to pay for a portion of the new barn that was completed within the past week.