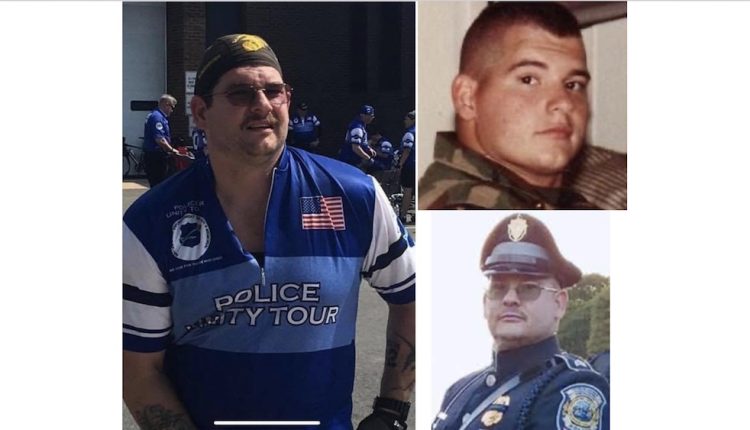 During the month of April, the 32nd Lights for Peace flag to fly at the Fort Taber – Fort Rodman Military Museum honors the memory of Sgt. Michael Patrick Cassidy, who served his country proudly in the United States Marine Corps, as well as serving his local community as a Sgt. on the New Bedford Police Department.

Sgt. Cassidy was born in New Bedford on July 15, 1968, the son of Stephen and Barbara (Cairns) Cassidy of Fairhaven. He attended high school at Old Colony Regional Vocational Technical High School and graduated with the class of 1986.

Upon graduation, he enlisted in the United States Marine Corps in August 1986 and went on to serve in Operation Desert Storm. Cassidy was stationed in Kanoehe, Hawaii, as part of the 1st Battalion, 3rd Division Marines, 1st Marine Expeditionary Brigade, Fleet Marine Force. He served a total of 5 years, 11 months and 19 days in the active-duty USMC, earning the rank of Sgt. (E-5), then continued to serve as a reservist for an additional 2 years.

Cassidy joined the New Bedford Police Department in 1994, serving in many roles throughout his distinguished career. Initially working as a patrolman, then working his way up to serve in the Narcotics Division, Criminal Investigation and Firearms.

Mike married his wife, Deborah A. (Fontaine) Cassidy on May 13, 2000, and they later welcomed a daughter, MacKenzie Cassidy. According to his wife, Mike was always there to help people, both on and off the job. He gave his time willingly and generously including “teaching kids martial arts, participating in fundraising events including Shop with a Cop, Buzz Off for Kids with Cancer, pedaling in the Police Unity Tour, buying local homeless hot meals and providing them with clothing,” just to name a few. “Mike was always there to lend a helping hand to everyone in need.” She explained that Mike was a very humble man and never wanted the spotlight on him. “He was our hero. We miss him every day.”

During his tenure on the police department, he received two life-saving awards, many citations and accreditation for his military and police service from the City of New Bedford, the Commonwealth of Massachusetts, and the United States Senate. He was also a recipient of the American Red Cross Real Heroes Award. Sgt. Cassidy also taught use of force/defensive tactic and was a CPR and firearms instructor. He taught Kenpo Karate for many years and was a 5th degree black belt.

According to the New Bedford Light, a non-profit news organization, Paul Oliveira, the Acting Chief at the time, shared his thoughts. “This is a tremendous loss to our department and to the City of New Bedford, as we all know Sgt. Cassidy was a proud officer who served the people of this city with his whole heart. Sgt. Cassidy loved being a police officer and went above and beyond to impact the lives of others in a positive way.”

It was just three years before his passing that Cassidy was recognized by the department as a “life-saver” after he performed CPR on a Market Basket cashier who had slumped over her register. He was off duty at the time but was the first at the scene and did what he was trained to do.

Cassidy had previously been recognized as a lifesaver in 2006 for his actions during the births of two babies.

“I was just helping people, just being a basic human being,” stated Sgt. Cassidy, at the time of the Market Basket rescue, explaining that he was just part of a team effort with firefighters and EMS.

Former New Bedford Police Union President, Hank Turgeon, who was also a patrol officer, worked with Cassidy and described him as kind and selfless. During a fundraiser for the family, shortly after Cassidy’s passing, Turgeon explained to Channel 12 News, “Your first impression of Mike is he was very rough around the edges. He was a Marine, a SWAT Team guy,” he said. “Once you got to

know Mike, he was extremely compassionate, and he was involved in every charitable event. He had a passion for this job and an even bigger love for people.”

Michael P. Cassidy passed away at the age of 52 on April 28, 2021, due to Covid-19. In addition to his wife, Deborah, his daughter MacKenzie and his parents Stephen and Barbara Cassidy, he is survived by his brothers, Stephen J. Cassidy and his wife Natalie of Mattapoisett, Christopher Cassidy and his wife Jacquie of Fairhaven; his sister, Maureen Missey and her husband Ray of Fairfield, OH, his nieces and nephews: Stevie and Meghan Cassidy, Joshua and Britany Cassidy, Mark and Mitch Aguiar, Nathan and Marissa Elias as well as aunts, uncles, cousins and great nieces and nephews.

His name will be added to the Police Memorial in Washington, DC during the celebration of Police Week from May 15th through May 21st.