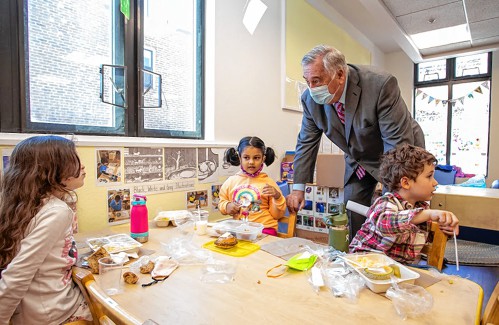 BOSTON — With more than $110 million for the early education and care sector, including a tripling of funding for provider salaries, House leaders said Monday that their fiscal year 2023 budget proposal will seek to make child care more accessible to families in Massachusetts.

Early education and child care appears primed to be a major focus of investment and attention as the House and Senate prepare to debate and pass their own budgets for fiscal year 2023 over the next seven weeks. The importance and vulnerabilities of the state’s early education and care field came into sharp focus when the pandemic closed schools and child care centers, upending the work routines of many parents, and advocates have said this year represents an opportunity for Beacon Hill to stabilize and reshape the sector.

A report released last month by the Special Legislative Early Education and Care Economic Review Commission estimated that $1.5 billion in investments are needed to stabilize the early education and care system and help it meet the needs of families.

“The report came through with quite a price tag, one which we could not handle all at once. But we made a commitment … that we wanted to begin immediately,” Mariano said. “We didn’t want to wait. We didn’t want to put off anything that was in that report that we thought could have an impact today.”

Child care has become even harder to find since the pandemic set in. The state’s early child care sector has lost 1,359 programs (about 17% of the total) since March 2020, which translates to 23,395 slots for children, the commission found.

The programs that remain across Massachusetts “are experiencing ongoing financial instability due to unstable and insufficient revenue and a growing workforce shortage,” the commission said.

The report said most programs are stuck in something of a vicious cycle: The cost of tuition is already a significant concern for families, but most providers can’t offer better compensation to their staff to improve the quality of care without increasing charges to families. The dynamic, the report said, becomes “a major reason that compensation levels remain so low in the early education and care field.”

In the budget that will be fully unveiled Wednesday and debated the last week of April, the House will propose $60 million for a rate reserve to increase salaries for teachers and others at subsidized providers, which Michlewitz said is three times as much as has been proposed in previous years. The House budget will also provide $16.5 million in grants to Head Start programs across the state, make $10 million in grants available for early education providers to defray the costs of child care for their own staff, put $15 million towards child care resources and referral agencies, provide $5 million for higher education opportunities for providers and fund outreach to families with $5 million.

On the policy side, the House budget will propose making permanent a pandemic-era policy under which subsidized programs are reimbursed based on enrollment rather than attendance, a change that providers have said would give them a measure of stability.

“The budget goes a long way towards implementing the commission’s recommendation to stabilize the field, increase access to high-quality care and improve staff compensation. To use the surplus in the budget this way will allow more middle-class families to enter and or remain in the workforce knowing that their children are well served,” Rep. Alice Peisch, who chairs the Education Committee for the House and was the House chair of the special commission, said.

The House’s proposals focus mostly on the providers and the workforce rather than on direct support for families who send their children to early education and care centers. Though the budget measures do not directly address the cost of child care for families, Mariano said Monday that “there are a few things that we hope will have an impact on the cost.”

“I think if you went around and talked to the teachers here today, they’d be thrilled to know that the salary support system is going to increase by 300%, three times,” Mariano said. “So that, if anything, will give us a consistent, we hope, a consistent and reliable workforce.”

Massachusetts families spend a lot of money on child care — infant care in Massachusetts averages more than $20,000 annually and the average cost for a 4-year-old is nearly $15,000 per year, according to the special commission report. For many families, early education and care eat up between 20 and 40% of their household income, and the share is even higher for families with one earner.

Michlewitz said the affordability of early education is “obviously an important discussion” that the House will continue to engage in, but defended the focus on accessibility.

“Accessibility is also something that we were hearing from many folks and taking these first steps is going to go a long way in trying to address accessibility, first and foremost, which will hopefully have far-reaching implications across the commonwealth in terms of workforce development,” he said.

The House budget will also make investments in broader workforce training and youth engagement programs, including $60 million for adult education geared towards English language learners and adults seeking their GEDs, $28.5 million for the YouthWorks jobs program, $20.4 million for career technical institutes, and $15 million to support teachers of color with scholarships and loan forgiveness.

The House plans to revive a 1990s program called “Tomorrow’s Teachers,” a scholarship program meant to attract the most gifted high school students into the teaching profession that was initially introduced by acting Gov. Paul Cellucci.

The House spending bill will also create new loan forgiveness and tuition reimbursement initiatives for clinical behavioral health workers within the Department of Mental Health ($20 million) and for workers at the state’s homeless shelters ($10 million).

“Similar to the early ed workforce, in the mental/behavioral health field, low wages, large caseloads, and high barriers to entry into mental and behavioral health have been persistent problems for decades and continue to harm recruitment and retention for the workforce,” Rep. Adrian Madaro, House chair of the Committee on Mental Health, Substance Use and Recovery, said. “During the pandemic, these issues have been brought into stark clarity and we must act to ensure that investments into the workforce match the level of talent and compassion brought by folks in this field every single day.”

Baker’s $48.5 billion fiscal 2023 budget plan (H 2) called for $820 million for the Department of Early Education and Care, but the advocacy organization Strategies for Children said Baker’s budget would not fund a rate increase for center-based early educator salaries or EEC’s workforce development line item. Baker’s fiscal 2022 budget did not fund the rate increase either, but the final budget passed by lawmakers included $20 million for it, the organization said.

Baker did include $450 million in a February supplemental budget bill to extend Commonwealth Cares for Children stabilization grants for child care providers through fiscal year 2023, but the Legislature stripped that funding out of the midyear spending bill before passing it. In all, an official said, the administration has distributed about $290 million in stabilization grant funding to early education providers.

“Of that amount, we’ve prioritized increasing subsidized provider rates by over $150 million in order to increase staff compensation and improve quality. And as of February, we are now implementing a new parent fee schedule that is more transparent and equitable, including no fees at all for families with the lowest incomes and rates that are below 7% of income for the vast majority of families with incomes below the state median,” he said.

The Recorder – Trial underway for former officer’s lawsuit against Greenfield