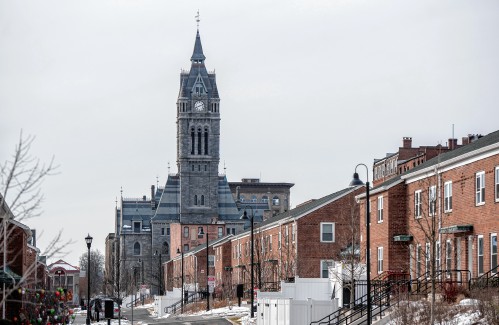 HOLYOKE — The City Council approved half a million dollars in Community Preservation Act funding for two projects, one of which drew nearly an hour of debate in the council’s chambers.

In a unanimous vote, the City Council voted April 5 to give a $350,000 grant to the Miracle League of Western Massachusetts to build a playground at Kennedy Park that will be accessible to children with disabilities. Another project — $150,000 for the nonprofit Girls Inc. to do preservation work on its historic building — was passed with only one “no” vote, pending approval of the city’s legal department.

That second project, which would pay for masonry, facade and roof repairs as part of a larger $5 million renovation, drew intense back-and-forths after several councilors questioned it. In particular, At-large Councilor Kevin Jourdain expressed dismay with the funding of a nonprofit’s work, given that they don’t pay city taxes, and questioned whether the money was going toward building maintenance, which is prohibited under state law.

“I think we’ve been very generous to this particular group, which is a wonderful group,” Jourdain said at one point. He said he was worried that funding a private group could set a precedent. “My concern is, if this is noble, lots of other things will be noble.”

Girls Inc., which seeks to empower young girls in the community, has long sought its own space. Last year, it purchased the historic former headquarters of the well-known city developer The O’Connell Companies, located at 480 Hampden St.

Several councilors pointed out that the city has previously given CPA funds to private institutions and nonprofits, from a playground at the Holyoke Boys and Girls Club to restorations of the horses on the Holyoke Merry-Go-Round.

“The money that we’re investing is into the building,” said At-Large City Councilor Israel Rivera, who is the City Council representative on the city’s CPA committee. “To me, this is a project that is going to add public benefit in the long run and in the short stay.”

Several other councilors wondered about the question of whether the organization’s proposal constituted building maintenance, leading the councilors to ultimately vote to approve the project contingent on the city’s legal department answering that question. Jourdain was the one councilor to vote against the funding.

The Miracle League’s “Playground for All” is a fully accessible, adaptive playground. Meg McGrath Smith of the city’s CPA committee explained to the City Council’s Finance Committee on March 28 that the playground will be located on city-owned land next to the playground that is already at Kennedy Field. That will benefit families who may have several children of varying abilities, she said.

“The niceness of being able to put it next to an existing playground is it really becomes a really useable space for families who have multiple children,” McGrath Smith said.

Students on the Holyoke Community College campus will now have access to free menstrual hygiene products as part of a “menstrual equity” initiative.

Last month, the college announced that it has begun placing menstrual equity boxes around campus. The boxes contain free menstrual products for those who need them. There are currently nine boxes around campus. In a statement, Rosemary Fielder, the college’s Thrive Student Resource Center coordinator, said that menstrual products are expensive and that students on federal food subsidies can’t use those benefits to purchase the products.

“It’s all about breaking down non-academic barriers,” Fielder said. “It goes along with school supplies, housing, food and transportation. This is one small thing we can do as an institution that can profoundly improve a student’s day-to-day experience, and that’s what Thrive’s mission is all about.”

J. Gi, a former student trustee, has helped lead the campaign. A computer science major at the school, Gi is also designing a computer inventory management system to track the supplies in the boxes, which include tampons, pads and Diva Cups, which are reusable menstrual devices.

“Access to menstrual products not only affects health, but can also impact attendance in school,” Gi said. “Providing products to people who just don’t carry them around in their bags all the time means they will be able to sit through longer exams and stay in class all day.”

The city’s Office of Planning and Economic Development has announced that it is hosting an “Explore Holyoke Restaurant Week” to promote the city’s eateries.

In partnership with Glammoré Premier Events, the office has announced that the week has been scheduled from June 6 through June 12. The initiative is part of the city’s 2019 tourism plan, which seeks to promote local businesses and tourism.

“Explore Holyoke Restaurant Week will be a fun way for people to find their new favorite restaurant and support some great business in the city,” Office of Planning and Economic Development Director Aaron Vega said in a statement. “The week will feature cooking demonstrations by several of our unique and ethnically diverse restaurants.”

As part of the restaurant week, participants will be able to track their “food journey” with stamps in a “food passport” that afterward can be used as coupons at those same restaurants. Restaurants must confirm their participation in the event by May 6.