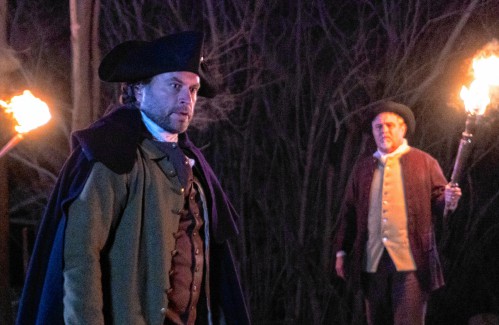 Two Franklin County towns are readying for the lights, cameras and action of entertainment production.

Colrain and Leyden have been tapped as the locations for some scenes in the upcoming film “Lost Nation,” a feature film set in Vermont during the American Revolution. Vermont-based Kingdom County Productions is expected to be in Colrain from April 12 to April 14 and in Leyden from April 14 to April 17.

Jennifer Latham, working on this film as the production company’s Vermont unit producer, said town officials in Colrain and Leyden have been exceptionally accommodating and cooperative during the planning process.

“There is no one … we have encountered in our work that has not been amazing,” Latham said. “Just, across the board, everyone has been fantastic. And that’s really unusual, to have that kind of level of support.”

Michael Slowinski, who sits on the Colrain Selectboard, said he has been told filming will take place at Hillman Farm on Adamsville Road as well as on Hillman Road.

“Let’s just put it this way, the town doesn’t plow that road in the winter because there’s nothing in between the bottom and the top of the hill. It’s an old gravel road that no one lives on,” Slowinski said, adding that horse and wagon scenes will be filmed there “because it looks about the same as (it did) during the Revolutionary War.”

Latham said the film crew will also be near the Pitt House, the 8 Main Road headquarters of the Colrain Historical Society, on April 13, 14 and 19. Filming will also take place near Foundry Village.

“It’s great,” Slowinski said. “It gives great exposure to western Mass. and Colrain, and it’s all positive. The natural beauty of this area is under-appreciated by a lot of people. Colrain is very bucolic. We have a lot of very nice areas. I think this will bring positive attention to Colrain. There’s an awful lot of hidden gems in these hills.”

Bill Glabach, chair of the Leyden Selectboard, said the production company wants to use the area near the Leyden United Methodist Church and “make it look like a dirt road, instead of paved.” He said the crew also wants to use a private home on Mid County Road that used to be Carpenters Tavern. Glabach said town officials were disappointed to learn this would not be a Hollywood production, though there is still excitement about a film crew coming to Leyden.

“I think everyone gets a little pride whenever something like that happens,” he said, adding that he is a little nervous about the road detouring that will need to happen. “It will be interesting. It could be a logistical nightmare, that’s the only thing that’s a little bit scary.”

Leyden Town Hall and an open field will also be used, according to Latham.

She mentioned filming will also take place in Marlboro, Vermont, and cast and crew members will stay on the Marlboro College campus that closed in the spring of 2020. She also said the film has the assistance of 46 college students involved with Semester Cinema, an accredited semester-long study-away program that immerses students in every aspect of filmmaking.

Director Jay Craven, who is also the film’s co-producer and co-writer, said the students have been doing an exceptional job.

“The students are fabulous,” he said. “They’re working everywhere — every department.”

Elena Greenlee, the film’s co-producer and co-writer, said “Lost Nation” is made up of two Vermont storylines that rarely converge. One storyline is that of Ethan Allen, a founder of the Vermont Republic who headed the Green Mountain Boys, a militia that captured Fort Ticonderoga in New York during the Revolutionary War. The other centers around Lucy Terry Prince, credited as being the first known African American poet in English literature after her husband, Abijah, bought her freedom from enslavement in Deerfield. The two built a homestead in Guilford and, as Greenlee puts it, unwittingly found themselves in the epicenter of a power struggle between New York and New Hampshire, both of which laid claim to Guilford.

The Princes also battled bigotry among their white neighbors, particularly John Noyes, who routinely harassed them and vandalized their property.

According to Timothy Neumann, executive director of the Pocumtuck Valley Memorial Association, which last year held a Lucy Terry Prince Day to celebrate her life on the 200th anniversary of her death, Prince could recite nearly the entire Bible from memory. Neumann also said she was the first Black woman — possibly the first woman of color — to argue her case before the Vermont Supreme Court, when she successfully defended her family’s right to their land.

The production company just finished filming in Nantucket and is headed to Franklin County for the final three weeks of shooting. Craven said “Lost Nation” will be available in theaters and via streaming by June 2023.