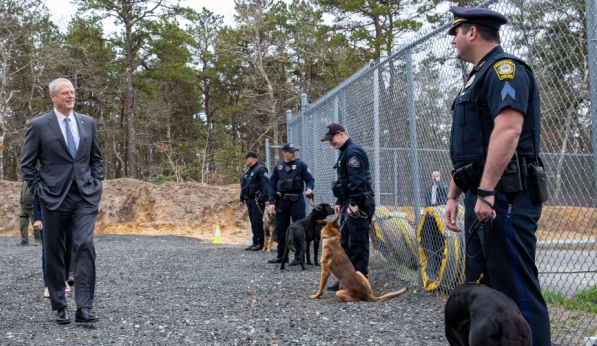 The bill was sponsored by Representative Steven Xiarhos (R-Barnstable) and Senator Mark Montigny (D-New Bedford) in response to the line-of-duty shooting that killed Yarmouth Police Sergeant Sean Gannon and severely injured his K9 partner Nero in 2018. At the time of Sgt. Gannon’s death, Massachusetts law did not allow for Nero’s critical injuries to be treated by emergency medical personnel. Nero’s Law now permits emergency medical personnel to offer emergency medical treatment and transport of K9 partners, including first aid, CPR and lifesaving interventions.

“Nero and all K9 Officers like him deserve the same quality of care that we are able to deliver to all law enforcement personnel,” said Governor Charlie Baker. “The swift medical treatment and transport now permitted through Nero’s Law will save lives, and we are grateful to the Legislature for their commitment to this important issue.”

“K9 Officers have an incredible impact on the communities and the departments they serve, and they risk their lives each day to keep residents safe from harm,” said Lt. Governor Karyn Polito. “Nero’s Law fulfills our shared obligation to care for them as they do for us and reaffirms our administration’s dedication to supporting those that bravely protect and serve.”

“Police dogs perform vital public safety functions in communities across the Commonwealth,” said Secretary of Public Safety and Security Terrence Reidy. “When an officer’s K9 partner is injured in the line of duty, they deserve the immediate access to life-saving treatment and transport that this law makes possible. Today’s bill signing protects loyal partners like Nero and renews our promise to never forget Sgt. Sean Gannon.”

“The Gannon Family is profoundly grateful to the legislators and veterinary professionals who took the initiative to draft the Bill that became Nero’s Law, which affords our beloved K-9s who serve us all with unfailing loyalty the expedient care they richly deserve if and when needed,” said Denise Gannon.

“I would like to thank Governor Baker for coming to Yarmouth today and for his leadership, as well as the many other people who were instrumental in seeing this bill become a law. As the former Deputy Chief of Police for the Town of Yarmouth, and as someone who therefore has a deep personal connection to the events of April 12, 2018, I am extremely gratified to see Nero’s Bill signed into law. This bill is evidence that good people can come together to do great things for the community. It is also evidence that Massachusetts is proud to stand by its first responders and to support them in their mission, and to protect them when needed,” said Representative Xiarhos (R-Barnstable).

“Today, we honor Sean and all the K9 officers and members of law enforcement who have dedicated their lives to keeping our communities safe. I am immensely grateful to Denise Gannon, Governor Baker, and my legislative colleagues for ensuring we got this bill signed into law. As a native son of New Bedford, Sergeant Gannon, and by extension his K9 partner Nero, is forever a beloved part of our community. It has been an absolute honor and a privilege to help honor the life of such an incredible man and dedicated public servant. I hope today makes Denise, Patrick, Dara, and the entire Gannon Family proud,” said Senator Mark Montigny (D-New Bedford).

“On this sobering 4th anniversary of K9 Sgt. Sean Gannon’s murder, we are humbled by the signing of Nero’s Law. It is legislation that we owe to our fearless K9’s who put themselves in harm’s way for our protection. Our K9 handlers also need to know that their K9 partners will receive the very best care available should they be injured,” said Yarmouth Chief of Police Frank Frederickson.

“We are thrilled with the passage of this legislation that protects these animals that do so much for us and ask so little in return. There are many examples of the sacrifices that Police K9’s make in protection of their human partners. We experienced this in Braintree on June 4, 2021, when Kitt saved the life of 3 officers during a violent assault. Although medical intervention would not have saved Kitt that day, there are numerous instances where timely medical treatment will save the life of a heroic K9. We feel that providing medical care is the least we can do for them,” said Braintree Chief of Police Mark Dubois.”