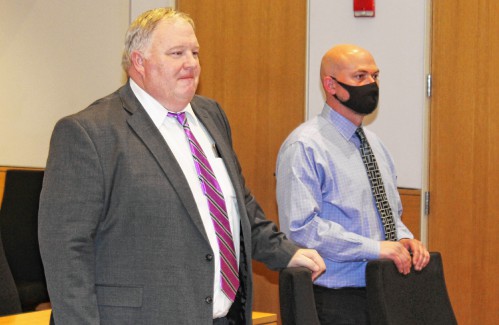 GREENFIELD — A former part-time officer with the Bernardston and Buckland Police departments was arraigned in Franklin County Superior Court on Tuesday on 10 child pornography charges after his case was transferred from Greenfield District Court due to its severity.

Jacob R. Wrisley, 40, of Millers Falls, pleaded not guilty to eight counts of possession of child pornography, one count of posing or exhibiting a child in a state of nudity or sexual conduct, and one count of photographing, videotaping or electronically surveilling the sexual or other intimate parts of a child. Bail of $2,500, which he posted following his May 2021 arrest, was transferred from Greenfield District Court on the same conditions — that Wrisley have no unsupervised contact with any child under 18, including by electronic platforms; have no overnight stays where children under 18 are present; not work or volunteer for any organization that serves children under 18; report to the Probation Department on schedule; and notify probation if he moves or changes his phone number.

Wrisley had been employed as a part-time officer with the Bernardston and Buckland Police departments for years. He was suspended and then fired following his arrest on possession of child pornography charges in May 2021.

“Upon learning of the arrest and charges brought against Jacob Wrisley, I was shocked and saddened,” Bernardston Police Chief James Palmeri said in a statement in May 2021. “I have a zero-tolerance approach when it involves charges of this nature, and some circumstances need immediate action. I have suspended Mr. Wrisley from the Bernardston Police Department and will be seeking his immediate termination from the town.”

Wrisley had worked “one or two shifts a month” in Buckland, former Police Chief James Hicks told the Greenfield Recorder in May 2021. Five months later, Hicks resigned amid a 2019 sexual assault charge he pleaded not guilty to. Hicks was released from Greenfield District Court on personal recognizance.

According to the Northwestern District Attorney’s Office, Wrisley’s case came to the attention of police investigators when they received a cyber tip related to child pornography from the National Center for Missing and Exploited Children. Police arrested him after executing search warrants at his home and car and interviewing him.

Wrisley is represented by attorney Robert Kinzer, of Barry & Kinzer in Pittsfield. Anne Yereniuk, the assistant district attorney prosecuting this case for the state, appeared at Tuesday’s arraignment remotely. Judge John Agostini presided over the session.

Wrisley is due back in Superior Court for a pretrial hearing set for 2 p.m. on Sept. 7.

After a dip in the early months of the pandemic, STDs are on the rise again

Putin vows to continue offensive until Russia’s goals are met