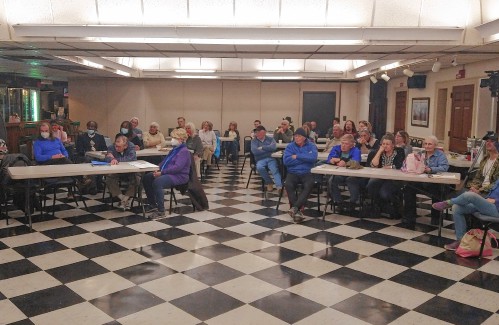 The Recorder – Residents air grievances at citizens forum in Greenfield

GREENFIELD — About 35 people who turned out to the Elks Lodge on Monday aired grievances about how the city is being managed and expressed their ideas on how to combat these issues.

Norman, a local activist perhaps best known for his crusade against Walmart, advocated for having all City Council members serve as at-large councilors, as opposed to having the body made up of four elected at-large members and nine elected from the city’s precincts. Lewis, a member of the Greenfield Republican Town Committee, spoke against the city’s plans for downtown and Corona, who ran unsuccessfully as a write-in candidate for the Precinct 9 seat, encouraged people to generate ideas for bringing more transparency to local government.

“So we just elected a slate of seven people who were elected by less than 2% of the voters. The lack of candidates and the lethargic voter turnout were warning signs of electoral problems in Greenfield. Many voters have unplugged themselves from local politics,” he continued. “It’s time to remove the invisible lines that divide our voters into precincts, to ask all candidates seeking a council seat to run at-large and to affirm that they represent … all the voters of this city.”

Precinct councilors, Norman said, mean certain elected officials go to bat for residents within invisible lines, “and I just think that’s silly for a town of this size.”

Resident Joe Morton, who recorded Monday’s forum on two cameras for the possibility of it being edited and broadcast on Greenfield Community Television (GCTV), removed himself from behind the cameras and sat down to say he favors having precinct councilors, comparing having all at-large councilors to employees not knowing who their supervisor is. However, Norman explained precincts would still exist for the purpose of United States congressional mapping and he is not proposing the elimination of precincts.

Lewis mentioned he started a petition calling for the removal of the controversial Jersey barriers that once blocked off Court Square, creating a pedestrian plaza. The pilot project ended in November, but Lewis expressed concern that the layout might be reinstituted.

“The mayor has stated her intention is to tear up the road and replace it with a pedestrian plaza between the current common and the Town Hall in order to hold events for the public,” Lewis said. “We already have a beautiful Energy Park that was created for this purpose. This idea for a pedestrian plaza is part of the mayor’s Master Plan, which includes tearing up Main Street to create a bike path between the sidewalk and … redesigned parallel parking spaces.

“This eliminates numerous parking spaces and creates a very dangerous situation for bicyclists and shoppers,” he added. “Many business owners are extremely concerned that this will decrease access to their businesses. Greenfield taxpayers are already hard-pressed to afford the increased taxes this year and the increase in the water and sewer rates.”

Wedegartner said it was determined that a committee, with members appointed by the mayor (at that time Mayor William Martin), would be set up to implement the Sustainable Greenfield Master Plan.

As for the intentions for Court Square, Wedegartner said multiple plans for making that road and the Greenfield Common a more pedestrian-friendly part of downtown date to 2012, years before she was elected mayor.

“However, I do strongly support those plans,” she wrote in an email. “They include several options for making Court Square (the road) into a partially pedestrian way. The pilot last year was a precursor to see what was workable and what the ‘pain points’ were. Overall, while the idea was not loved by some citizens, it was very popular with many others.

“During the winter we received multiple requests from a variety of citizens and citizen groups to hold events this spring/summer on Court Square,” she continued, adding that the city continues to evaluate those requests, with plans to make a decision about a temporary setup for Court Square again this year.

Corona then spoke and called for unity.

“I encourage everyone here to have discussions with family, friends and neighbors again. Ask yourselves if good intentions have been misplaced. Have we been misinformed, creating and causing the division we are trying to overcome together in our Greenfield community?” Corona read.

Republicans Jeffrey Raymond, an Athol man running for state representative of the 2nd Franklin District, and Jeffrey Sossa-Paquette of Shrewsbury, running to represent Massachusetts’ 2nd Congressional District in the U.S. House of Representatives, were in attendance Monday. They joined other attendees in expressing disappointment that no city officials or city councilors stopped by the forum despite it being free, open to anyone and mentioned in a newspaper article.