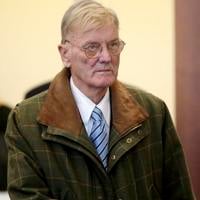 SALEM — “Hi,” John Donovan III said into the camera. “I wanted to offer a brief testimony regarding the care of my children if something were to happen to me.”

Donovan III, of Essex, was nearly two years into a battle with adrenal cancer at the time the video was made, in September 2014.

“I want to be clear that my wife Megan is responsible for all decisions regarding (their) upbringing,” he said in the video, played for a Salem Superior Court jury on Tuesday. “I have not granted any authority and do not wish to grant any authority to my father in regards to their upbringings.”

And days before his death, in April 2015, at 43, Donovan III made another last-minute request, his longtime lawyer and friend, Mark Glovsky, testified Tuesday: He wanted a second will codicil that would specifically exclude his father, John Donovan Sr., from playing any role in his funeral or any other memorials — or in his children’s lives.

In that codicil, signed one day before his death, Donovan III made it clear that his father was to have no contact whatsoever with the children, Glovsky told jurors Tuesday.

Eighteen months later, and more than a year after Donovan III succumbed to his illness, prosecutors say his father, Donovan Sr., filed 25 separate documents in one day at the Salem Registry of Deeds.

The documents included deeds, mortgages and mortgage discharges, and a will codicil — all of the documents bearing various dates going back as far as 2001.

The second day of testimony in Donovan Sr.’s trial on forgery, attempted larceny and witness intimidation charges took jurors through those allegedly forged documents — and the potential impact they would have had but for their discovery.

Prosecutor Jack Dawley led Glovsky through the documents — paperwork he said his firm had never seen until it was filed.

Glovsky explained to jurors that the documents would have given Donovan Sr. control over multiple real estate parcels on the North Shore by creating purported mortgages totaling nearly $30 million on several of them, and by allowing other parcels to be transferred for either a nominal sum or for less than market value.

Donovan Sr. also sought to add himself as an “additional” representative for the estate, which his son had already put into the hands of his longtime friend Jason Konidaris, a well-known New York financier. That would have given him a role in the trust fund Donovan III had set up for his children, who were 5 and 3 at the time.

Throughout the first two days of testimony, Donovan Sr.’s lawyer has sought to highlight the periods during which his client and Donovan III were aligned in litigation involving the other Donovan children.

Defense lawyer Robert Strasnick told jurors in his opening statement that Donovan III had expressed one set of wishes to his family and siblings while also continuing to work with his father.

He suggested in his questions that the father and son were closer than other family members knew or were willing to acknowledge.

In one line of questioning on Tuesday, he asked Glovsky about a 2013 “life estate” Donovan III had granted to his father for a home in Magnolia, at no cost. The term refers to an agreement to allow a person to remain in a property he or she does not own.

“That was a gift?” Strasnick asked.

“Well my recollection is that John bought a piece of real estate on Shore Road, held in a trust, and the purpose was to provide housing for his father,” he said.

Strasnick also questioned Glovsky about a discrepancy on that last codicil, in which the suffix “Jr.” was used to describe Donovan Sr., an error that the dying Donovan III did not pick up. Strasnick suggested that oversight might be indicative of whether Donovan III was capable of signing the codicil as he lay dying.

Putin vows to continue offensive until Russia’s goals are met