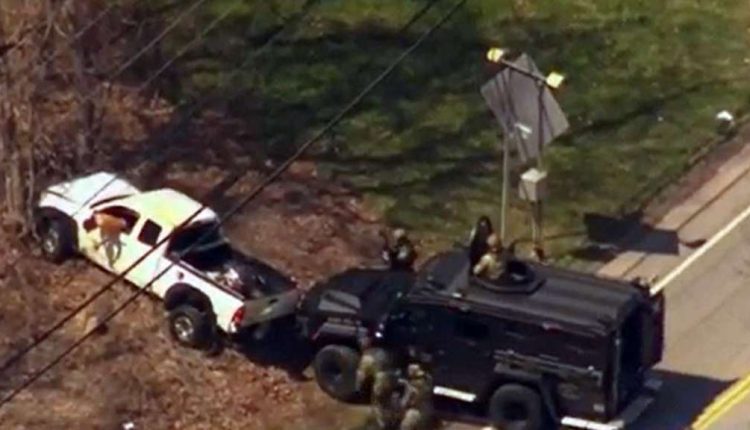 Ian Grant, 36, of Dartmouth was arrested following a standoff on the side of Route 2 in North Stonington, Connecticut around 2 p.m. about an hour after his pickup truck went off the road and into the woodline, according to Mass. state police.

Massachusetts troopers initially started searching for a white Toyota Tacoma in the area of I-195 in Westport around 11 a.m. after a “possibly armed” man evaded cruisers that were chasing after him, according to state police. Troopers said they were trying to pull him over in connection with an outstanding felony warrant out of New Bedford District Court for assault and intimidation of a witness.

Grants home on Prospect Street in Dartmouth was also set ablaze earlier in the morning. The cause of which remains under investigation.

“He was leaving the fire. He took off and I talked to him before he left,” said Grant’s neighbor Peter Simmons. “So I knew something was wrong because you’re not driving away from the house that you’re living in when it’s on fire.”

By 11:20 a.m. Grant had driven up over the median at troopers who had deployed a tire deflation device. It was then that one or more officers fired their service weapons. Grant then allegedly struck two of the cruisers before continuing into oncoming traffic.

Not long after that, Grant’s white pickup was spotted again in Jamestown, R.I. and the chase began again on Route 1. Shortly before 1 p.m., state police announced that the suspect was being pursued on Route 78 west in Rhode Island.

The driver came to a stop near Frontage Road in Connecticut a short time later and officers set up a perimeter around the truck, according to state police. SKY7 HD flew over the scene where authorities pulled him out of the driver’s side window.

No injuries were reported.

The incident remains under investigation and the suspect is due in court on Thursday.

Red carpet style choices are back with return of award shows