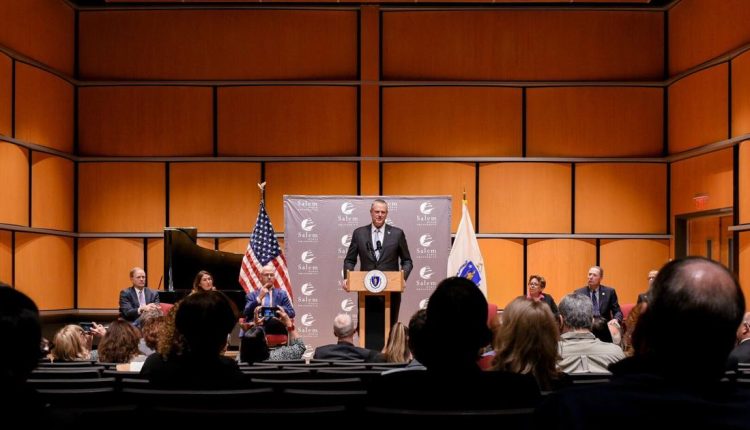 SALEM — With the governor and other state officials to either side, Salem State University President John Keenan only got 15 words out about a grant announcement before the recital hall on the Harrington Campus exploded in cheers Wednesday afternoon.

“You can’t possibly believe how happy I am,” he started, drowned out by applause. After several seconds passed, he leaned into the mic and added, “Wow, that was easy! I wasn’t even telling you what I’m thankful for!”

“We’re basically here to talk about a series of pretty significant investments we’ll be making on our higher education campuses,” Baker said. “They’re all designed in many respects to help people basically continue to drive their campuses and learning environments in the general directions of where the opportunities for the kids are, when it comes to the next act with regard to our economy and our future.”

First unveiled in October 2019, SSU BOLD seeks to reorient how its programs are spread out on campus. This will be done through selling South Campus to private developers, rehabilitating the old Horace Mann Laboratory School building, expanding Meier Hall, and re-tooling Berry Library to create class space.

The project hit a speed bump in 2021 when the same state officials in town Wednesday had announced nearly $90 million in spending and borrowing for school projects, but not for Salem State.

2022, it turned out, was Salem State’s year. And the COVID-19 pandemic, has transformed higher education as well, before any of these projects had a chance to do so, according to Lt. Gov. Karyn Polito.

“I also think about the challenges you have in higher education, in attracting students — especially coming out of COVID when there are online programs and other ways for people to access credentials, skills, degrees, and work productively and successfully,” Polito said. “This takes one of those things on your plate (funding SSU BOLD) and helps you resolve it for all those reasons, so you’re relevant for today and a long time.”

The announcement also comes amid ongoing scrutiny of campus debt and past spending. To that end, on Thursday night, the Massachusetts Teachers Association was also due to host a “Campus Debt Reveal” event on Zoom to put more awareness on campus debt at state colleges across Massachusetts, including Salem State University.

State officials believe the time has come to move the projects forward.

Salem State University: $30 million for SSU BOLD, which paired with $54 million from Salem State, completes funding for the $84 million project.

Springfield Technical Community College: $30 million to relocate health and patient simulation programs into better locations on campus, with $11 million provided by the campus to finish funding for a $41 million project.