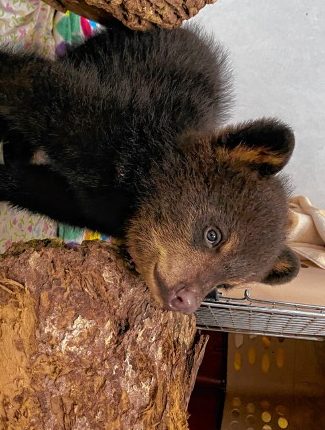 GREENFIELD – A black bear cub rescued by Greenfield Police officers after its family was killed by a vehicle driving on Route 2 last week is now eating well and recuperating at New Hampshire’s Kilham Bear Center, which has named the animal Alma.

According to the Greenfield Police Department’s Facebook page, officers responded to Route 2 at 8:43 p.m. on April 8 for a report of a mother bear and two cubs killed after being struck by a car. Officers arrived and heard squealing before finding a frightened third cub taking refuge in a tree. Deputy Chief William Gordon said Officers Brandon Lagoy and Justin Purinton understood the danger the orphaned cub was in and used a stick to pry one of its paws off the tree, coaxing it to descend the tree.

Lagoy and Purinton placed the cub in the back of a cruiser and brought it to the police station. According to the Facebook post, AMR Ambulance provided a kennel to keep the animal safe. The next morning, Gordon said, officers with the Massachusetts Environmental Police took the animal to the Tufts Wildlife Clinic, where veterinarians determined the cub was in good physical condition and had no injuries. The cub is believed to be 10 to 12 weeks old, according to a statement provided by Dr. Maureen Murray, the clinic’s director. The cub is now in the care of the Kilham Bear Center in Lyme, N.H.

Gordon praised the kind actions of his officers, saying they exhibited professionalism and compassion.

“That word is foremost in my mind. They acted with compassion (for) that poor orphaned animal. They were worried for the welfare of the cub,” he said. “That’s what we do every day. A lot of people paint (police officers) with a negative stroke but in reality our officers work with compassion (for) humans or animals or whoever needs help. And we don’t judge.”

Gordon said he cannot remember another case of a bear cub rescue in his 30-year career.

Before realizing the Kilham Bear Center had named the animal, Gordon took to Facebook to initiate a naming contest: some suggestions included Blue, Betty (after actress Betty White), Bearbra Streisand and Halle Beary. There was also a suggestion for Bandit, a reference to the 1977 film “Smokey and the Bandit,” because Gordon mentioned Smokey Bear represents firefighters.

Red carpet style choices are back with return of award shows