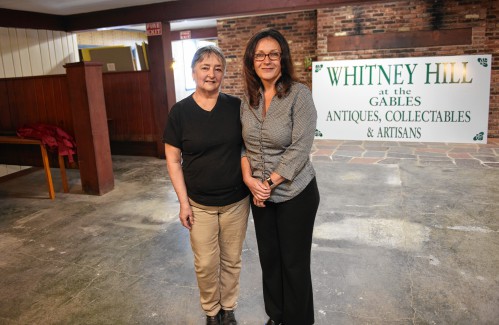 DEERFIELD — With a growing list of vendors wanting to work with the store, Whitney Hill Antiques is opening an additional location at the former Gables Restaurant at 250 Greenfield Road.

Slated for a soft opening May 1, owner Dale Whitney is currently in the process of renovating the Colonial-style building. The Deerfield store will mirror the 10 a.m. to 5:30 p.m. hours of its Greenfield location, but will feature different vendor spaces.

The building is approximately the same square footage as the Greenfield location, but it’s all on one floor, which Whitney said made it an attractive choice. Compounded with the location of the Deerfield store, Whitney said this is a great move.

“Down there we have a different clientele with the private schools, new brewery (Tree House Brewing) and Yankee Candle,” Whitney explained, which brings people from out of state or from neighboring counties. Even though there will be a new client base, she emphasized that just means there will be a “larger scale and larger range” of antiques available and the store is “still going to be something for everyone.”

With the new location and all its “Colonial charisma,” Whitney also sees an opportunity to hold events.

“We’re trying to get the community involved,” Whitney said. She floated out several ideas, specifically highlighting charity sales where residents could donate items for an outdoor sale and all proceeds would go toward a chosen nonprofit.

“This is our first time with two stores,” Whitney said, adding that she thought about opening a second store in the past, but “didn’t have the experience at the time.”

Whitney Hill Antiques started in Whitney’s garage 13 years ago and moved around Bernardston before landing in its first Greenfield location. The store moved to its current 122 Main St. location in November 2018.

“We just kept growing,” Whitney said. “We’re still growing, but this is the end.”

Fenway Park has a new food lineup this season. Which menu item are you most excited to try?