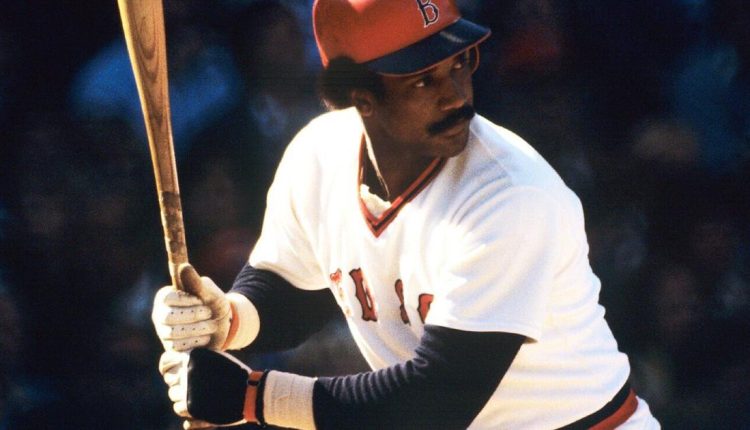 Hall of Famer Jim Rice reflects on influence Jackie Robinson had on him, baseball and America | News

It hit Jim Rice like, well, the way he used to hit a lot of pitchers during his Hall of Fame career.

Rice, in Los Angeles for Mookie Betts’ wedding last December, remembers standing quietly in front of a statue of Jackie Robinson at the concourse near the entrance of Dodger Stadium.

With his wife Corine, equally impressed, Rice documented the visit to Robinson’s statue with a 2-minute, 30-second video of the experience.

One particular quote by Robinson, emblazoned in the granite at the bottom of the statue, made Rice think:

“I’m not concerned with your liking or disliking me… All I ask is that you respect me as a human being.”

“That’s it, right there – Jackie’s words,” said Rice. “That’s all we want, African Americans, whites or whatever. That’s what we all want. Respect me has a human being.”

There were other quotes on the base of Robinson statue, which shows him in slide-mode “stealing” home, that Rice remembered almost exactly, missing by a word or two.

If there was a major leaguer, decades after Robinson’s decade-long career with the Dodgers, who could empathize with the trailblazer, Rice would be a top candidate.

Rice wasn’t born for Robinson’s celebrated debut in 1947 and was only three when Robinson retired in 1956.

But he understood early on about not only Robinson’s impact on not only baseball, but the world.

“This was before TVs, when most people listened to games on radio,” said Rice, saying his father had told him about those early Robinson years with the Dodgers.

“Everyone wanted to listen, especially African-Americans,” said. “That’s a lot of pressure, being the first, a national hero for a lot of people. People took notice. They’d put off eating to listen to Jackie.”

As for baseball talent, Rice said Robinson more than fit the bill, which was vital being his place in history.

“Six World Series in ten years,” said Rice, of the Dodgers six trips, which included one championship. “That says a lot. I know he won some nice awards (1947 Rookie of Year, 1950 MVP, 6-time all-star, etc.), but he a big effect on winning. That was key. Jackie was a winner.”

A native of the south, Anderson, South Carolina, Rice had his own personal Robinson-like story.

After his junior year he left an all-black high school to attend a mostly-white high school upon his father’s advice, to help his baseball career.

Drafted 15th overall in 1971 out of high school, Rice was on the Red Sox by the end of 1974 and was a key cog in the 1975 dream team that lost in Game 7 of the World Series to the Cincinnati Reds, which included Carl Yastrzemski, Carlton Fisk, Luis Tiant, Dwight Evans and Fred Lynn.

Rice and Lynn were in the running for both Rookie of the Year and MVP. Unfortunately Rice broke his wrist after being hit by a pitch – he played five more innings before leaving the game – a week before the season ended.

Lynn eventually won both awards. Rice was second in ROY and 3rd in MVP.

But in terms of their careers, Rice was an all-time great, like Robinson winning an MVP Award (seven times in the top five in voting).

Unlike Lynn, it was not easy being a star in Boston, due to Rice’s skin color, going back to the 1970s, school busing battles, which put innocent people in the crosshairs.

Rice was the only black player on the Red Sox for much of his career.

“I wasn’t the only one that dealt with stuff. Bill Russell had stories (dealing with racism),” recalled Rice. “But I took it as a challenge. I realized early on that you have to have tough skin to play here, no matter what you skin color is. I wanted to show people that I loved the game. I wanted to play every day and not make excuses.”

“There were black athletes that would ask me, ‘How can you play in Boston?’” said Rice. “You go out and play hard every day. The fans here know if you’re cheating them and they respect you.

“The fans showed me respect. I came to Boston in 1975, raised a family here, and I’m still here, aren’t I? Boston hasn’t always been perfect, but it’s home to me.”

Rice, who turned 69, said he will enjoy Jackie Robinson Day, on Friday, April 15, celebrating 75 years of his anniversary and really appreciating the all-time great now more than ever.

“When I was coming up I had guys like Johnny Pesky and Yaz, that showed me the ropes,” said Rice. “I owe them a lot. Jackie originally had Branch Rickey (Dodgers GM) who believed him. We all need people to believe in us and it doesn’t matter what color you are. We all need to be there for our young people, just like Jackie was for all of us.”