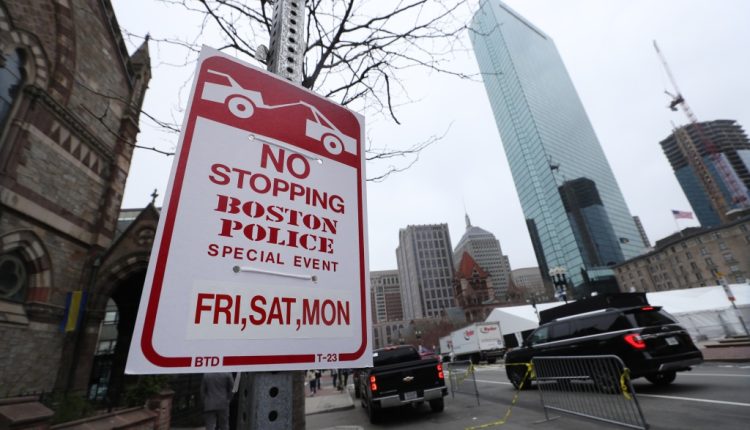 ‘No credible threats’ ahead of Monday’s Boston Marathon, authorities say

Local to federal authorities say they’ve been preparing for security and safety for the upcoming Boston Marathon since the day the last one ended six months ago.

Multiple law enforcement leaders said at a Thursday morning press conference in Boston’s Copley Square — a venue near the race’s finish line on Boylston Street — that they are aware of “no credible or specific threat,” in the words of State Police Deputy Superintendent Scott Warmington.

“The many meetings, calls and coordination sessions bring us where we are today, ready to implement a robust plan to ensure a safe Boston Marathon for runners, spectators, staff and volunteers,” Jeanne Benincasa Thorpe, Massachusetts undersecretary for Homeland Security, said.

Tuesday’s attack on a New York City subway car in Brooklyn was very much on the minds of authorities during their presentations, and each of the law enforcement speakers reiterated the common advice that morning that “If you see something, say something” and call 911.

Joseph Bonavolonta, the Special Agent in Charge of the FBI’s Boston division, went further to tweak the phrase to “If you see something about somebody, say something.”

“Tips from the community are essential because if we look at acts of mass violence, there’s almost always somebody who saw the person change — a parent, a classmate or a friend,” Bonavolonta said. “When people speak up, history has shown that we can prevent tragedies from occurring.”

Monday’s Boston Marathon will be the first to be held on the traditional Patriots’ Day date in three years as the COVID-19 pandemic led to the event being canceled for the first time in its then-124-year history in 2020 and then postponed until October of last year also due to pandemic concerns. It will also return to full participation with 30,000 runners, added Boston Athletic Association President Tom Grilk.

“Here in Boston and our surrounding towns have all very much enjoyed the well-deserved easing of the mask mandates and the COVID requirements over the past month or two and this is really a reflection of the fact that we’re in a good place – viral prevalence in the community is low and we’ve done a good job weathering this storm,” said Dr. Aaron Baggish, the co-medical director for the event.

But Baggish — who at least once ran the marathon in less than two hours and 36 minutes, according to his introduction by Grilk — said that the community and the country isn’t quite in the clear just yet.

He said that all temporary medical facilities set up for the event will follow local hospital requirements and mandate masking and at least try for social distancing, including at the giant Tent A at Copley Square that will serve as a full makeshift hospital and reduce any possible strain to local hospitals during the event.

The MBTA is also maintaining masking regulations, Transit Police Chief Kenneth Green said, adding that no masking requirements will change as the city embraces the throngs of participants and onlookers who will descend on the city in coming days.

He added that Copley Square MBTA station will be closed all day for Monday’s event and that surface-level Green Line stops at South Street at Commonwealth Avenue and Kent Street and St. Mary’s Street at Beacon Street will be closed that day from 10 a.m. to 6 p.m.

The State Police advise visitors not to bring backpacks, suitcases or other types of containers, all listed on the agency’s Facebook page, as all will be subject to checks, Deputy Superintendent Warmington said.

He said his agency will “execute a robust, dynamic and multi-layered operations plan” that includes the visible presence of uniformed officers, troopers and agents of multiple agencies, as well as special units like a hazardous and explosive materials detection team and overhead monitoring by the State Police Air Wing, as well as nonvisible operations like undercover law enforcement and a multi-agency operations center that will oversee all efforts.

With climate bill, Senate starts ‘traveling down the road’ to net-zero