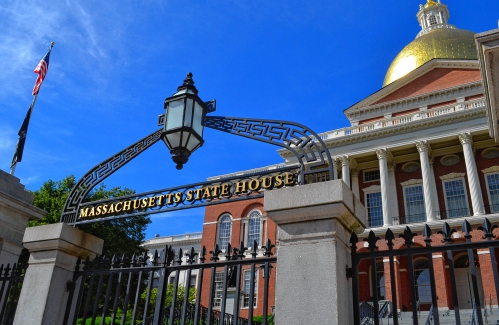 BOSTON – County sheriffs and district attorneys from across Massachusetts offered their support Thursday for the bill that seeks to allow residents without immigrant status to apply for a driving license.

The Work and Family Mobility Act passed the House in February with an historic 120-36 vote, a tally big enough to circumvent a potential veto by Gov. Charlie Baker. The bill now awaits floor action in the Senate.

“I was in the Legislature when it was first introduced. It wasn’t an easy bill, at that time, to support. We took a lot of flak at the time for supporting this,” said Middlesex County Sheriff Peter Koutoujian. “It’s amazing how a couple of decades changes a community’s perception about a piece of legislation.”

The bill has now garnered over 100 legislative co-sponsors and more than 270 endorsements from across the state.

Neighboring states like Connecticut, New York, and Vermont have already passed legislation allowing immigrants to apply for licenses. If passed, Massachusetts will be the seventeenth state to do so.

Public officials attending the meeting highlighted the need for the bill in order to allow immigrants to travel legally, especially in rural areas of the state that do not have reliable public transportation that cities like Boston do.

“Out here in rural Massachusetts, and the Pioneer Valley, I look at the five colleges out here and I look at pristine lands and farming, and I see that we potentially are a magnet for many people who want to come to this country and better themselves and then when they get here, they find this kind of enormous obstacle, particularly in rural Massachusetts where in Franklin County it can be 20 miles from your home to the nearest grocery store,” noted Franklin County Sheriff Christopher Donelan.

“I think this is the moment we all are in concert with the fact that we need to empower our undocumented immigrants to live decent lives to be able to go from one town to another to get a job, to take their kids to school, and medical appointments,” said Sullivan.

According to trends reported by states that have passed similar bills, there has been an increase in car insurance revenues. There has also been a noticeable decline in the number of hit-and-run cases and uninsured and unlicensed drivers on the road, eventually leading to improved road safety.

Robert Ogden, sheriff for Dukes County mentioned a unique issue festering on Martha’s Vineyard, that he hopes the bill would help alleviate.

The island’s primary source of revenue is the large influx of tourists during the summers that sees the population jump “from 18,900 to 200,000 according to the last census,” he mentioned.

This tourist population is catered to by a largely immigrant workforce. Due to the lack of affordable housing on the island, however, the workers are usually commuters from neighboring areas like Cape Cod. But as they cannot apply for legal licenses, they drive without one.

“If you look at the information we have, between 2017 and 2021, our office processed 282 arrests, especially by Chapter 9010A: operating a vehicle without a license,” said Ogden. “We are not saying these are all undocumented immigrants, but a majority are a part of our immigrant population.”

According to the latest numbers Ogden provided, between March 21 to April 1, 20% of the arrests were for driving without a license. “This is becoming a problem that needs to be addressed,” he said.

As the bill awaits a floor vote in the Senate, officials are optimistic that it will pass without any hiccups.

Senate President Karen Spilka said at a recent event that she was “looking forward to bringing the Work and Family Mobility Act to the Senate floor so that it can become law.”

“The Senate has passed this legislation in the past. The House has some very tight language in there. It is supported by all the advocates and law enforcement, so we will see what the Senate wants to do,” said Koutoujian. “The fact is that, conceptually, they (Senate) have been there already. I believe we’ll be ready to accept this coming through and we can work out the details and get this issue done this year.”

Aryan Rai writes for the Gazette from the Boston University Statehouse Program in Boston.