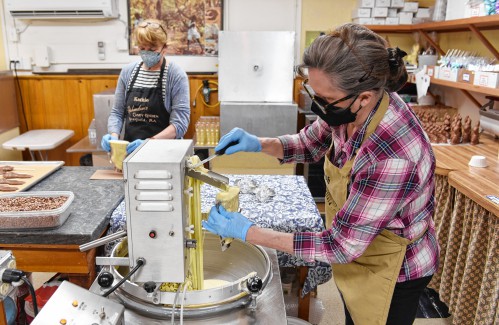 DEERFIELD — Each Easter, the Richardson’s Candy Kitchen family engages in a chocolate competition.

As shoppers at the candy store get their fill of chocolate bunnies to stock their Easter baskets, owner Kathie Williams and her mother devised a way to add some character to the sugary hares: each bunny is assigned the name of one of the children in the family and whoever’s bunny sells the most that year gets bragging rights.

“It’s been a fun tradition for us,” Williams said of the decades-old competition. “Everybody wants to know who sold the most each year.”

The names, Williams said, were a way to spruce up the busy Easter season.

“It started with that, and it’s been fun since then,” she said.

Taylor Williams, the 32-year-old middle child of Kathie Williams, said it’s always a great time seeing which bunny pulls ahead at the end of the Easter season.

“It was a little bit of a friendly competition between the cousins,” he said.

Each bunny — named for Carter, Alyssa, Cameron, Sarah, Taylor and Emily — has its own size and look to it. Kathie Williams said the family “did try to think of the personality of the kids” when they were creating the molds and the bunnies have retained the same name for years.

“In the very beginning, we did switch the names,” Kathie Williams said. “They’ve been set now because the grandchildren are in their 20s or 30s.”

Her son said he can see why his bunny is decked out in “his Easter party pants and jacket.”

“She tried to match the bunnies to the different cousins,” Taylor Williams recounted, adding he thought the 6½-inch bunny was named after him because he’s the tallest cousin. “I was a feisty child … so I guess that bunny’s a little bit feisty.”

At this point, the only way the family would shift names around would be if Kathie Williams’ kids start having children of their own.

“We’re kind of waiting on great-grandchildren,” for her mother, Kathie Williams said.

So, which hare runs away with the race every year? None of them, according to Kathie Williams.

“We tend to go back and forth a bit each year,” she said. “It does vary a bit and we have different size bunnies, so that plays into it.”

While the winner may change, Taylor Williams said he has had tough luck as he has never won.

“I don’t think I ever have,” Taylor Williams said. “I believe my cousin Emily tends to win.”

I-91 overpass work will shut Northampton exit, Route 5 next week