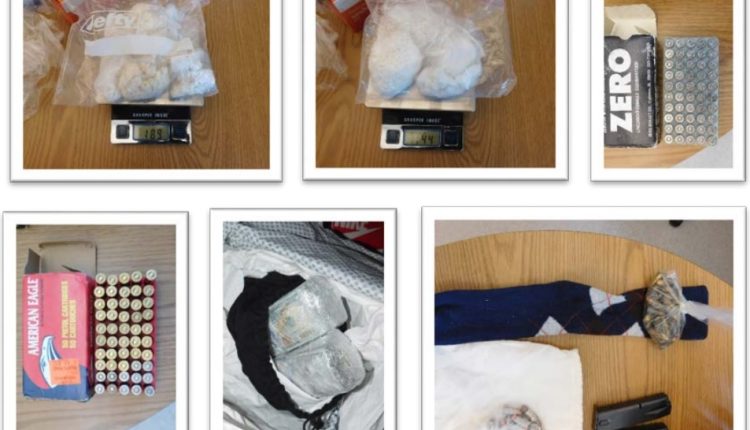 A major player in Boston’s cocaine trade pleaded guilty to multiple drug trafficking charges that could put him behind bars for up to 60 years.

Kenji Drayton, 41, of Boston, was one of 24 people charged as a result of the federal “Operation Snowfall” investigation into gangs operating out of Commonwealth Development in Brighton, formerly known as Fidelis Way.

“Despite a pandemic and constant, nationwide criticism of police officers, these agents and officers risked their own safety to take two dozen alleged gang members and drug traffickers off the street, seizing over two dozen firearms, narcotics and cash along the way,” said then-U.S. Attorney for Massachusetts Andrew Lelling in the wake of last June’s arrests.

The charges could put him away for up to 40 years on the 500 grams or more charge and up to 20 years in the generic distribution charge, according to federal sentencing guidelines. The crimes carry respective maximum fines of $5 million and $1 million.

The investigation began in November 2018 and by the time the arrests were made, the fruits of the investigation that featured on-the-ground surveillance, controlled buys and wiretapped phones were laid out in a 117-page affidavit, with another later 35-page supporting affidavit.

Drayton is the second defendant to plead guilty in the Fidelis Way-related drug conspiracy, following a plea by Drayton’s associate and customer Renardo Williams, of South Boston, on Sept. 7 last year. Across all cases of Operation Snowfall, 11 have pleaded guilty.

Brighton’s Commonwealth Development, the complex at Commonwealth Avenue and Washington Street where multiple gangs and drug trafficking organizations investigated by Operation Snowfall made their home, was built as a 640-unit public housing development in 1951. It quickly featured “high vacancy rates, excessive turnover rates, and rampant crime,” according to an affidavit.

To address these issues, developers expanded its intentions from strictly public housing to include moderate-income residents, reduced density to 392 units and sported premium amenities like a day care center.

Despite the efforts, police say that patrolling the complex is made difficult by its insular nature, with only one way in and one way out, a feature that made it appealing to the enterprising drug traffickers.

The site is the backdrop to multiple rap videos published on YouTube that brag about the exploits of the trafficking operations. One cited by investigators, the explicit “16 Bars of Hell” from Oct. 25, 2017 — which didn’t really ignite any rap careers as it stands at only 711 views — features purported gang members counting through wads of cash littered across an apartment dining table.

“I’m down for a fight, better grab that knife. If you heard, little (expletive), I don’t play too nice,” one bar goes. “The ice around my neck got a (expletive) lookin’ flashy.”

Any of that “ice” won’t follow them into prison, as the Federal Bureau of Prisons’ Inmate Information Handbook states that jewelry is limited to plain wedding bands and, “with prior approval, a religious medal without stones.”