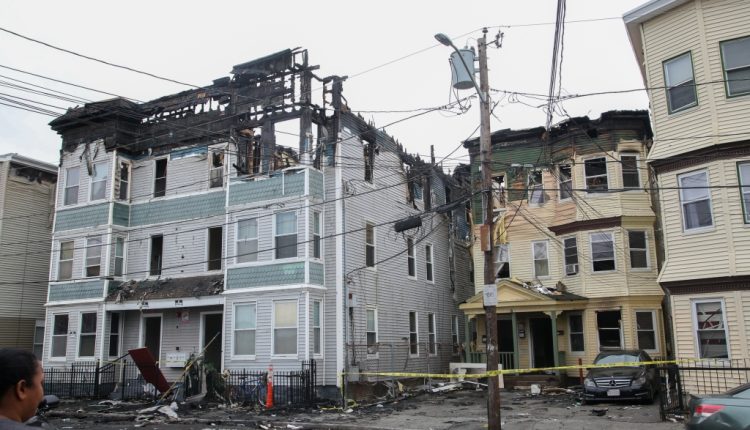 ‘Easter miracle’ nobody died in Lawrence fire; at least 16 homeless

Ashes in the wind are the first thing that greeted Paola Polaonco when authorities finally allowed her to see what was left of her Lawrence home after an eight-alarm fire left her family and at least 16 others homeless the day before Easter.

“Your life changes in a few minutes. But we’re OK because we’re alive,” Polaonco, 32, said as she surveyed the blackened skeleton of 18-20 Crosby St., one of six buildings on Crosby and Salem streets that were either gutted or damaged.

The blaze began shortly before 10 p.m. Friday on the third-floor porch of 22-24 Crosby St. and spread from there, driven by high winds, Lawrence Fire Chief Brian Moriarty said, but as of late Saturday afternoon, its cause remained unknown.

Nearly 100 firefighters from 30 communities helped fight the fire, which caused more than $1 million in damage, Moriarty said, but left no one injured or dead, despite its intensity.

“I consider this to be … an Easter miracle,” said City Councilor Marc Laplante. “It’s amazing that we were able to walk away from this … unscathed.”

Laplante acknowledged that some of the buildings’ tenants lost everything.

“That will be a challenge for people to build back their lives from horrendous circumstances,” he said.

Polaonco said she was out with her sister Friday night, visiting a friend, when her mother called and said the house was on fire.

The two sisters rushed back but couldn’t get near the house because authorities had blocked off the street to allow firefighters to do their job.

“When I saw the house today, I felt sad,” Polaonco said. “I hope we’ll be able to get at least some of our things.”

Junior Nunez, who lives a few doors away from the homes that were on fire, was taking out the trash when he heard sirens.

“But that was nothing unusual,” the 15-year-old said. “And then I saw it. You could see big, tall flames. It kept spreading from roof to roof. The fire was spreading sideways because the wind kept pushing it. The wind was really bad, really strong. My friend’s porch burned, and the third floor was gone.”

Residents affected by the blaze were taken to an Andover hotel, where they will spend the next few days until longer-term arrangements can be made, officials said.

City Councilor Stephany Infante visited them there and found them “still in shock,” worried about the things that remind them of “the memories they cherish.”

Crosby Street is one of the streets that was affected by a series of natural gas explosions in Lawrence, Andover and North Andover that killed one man, injured dozens more and forced thousands of people to be evacuated from their homes in September 2018.

The Recorder – EarthTalk: The environmental toll Russia’s war on Ukraine is taking