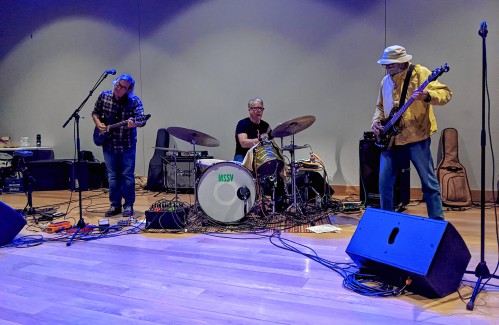 EASTHAMPTON — In December 2020, after it had shut down much of the performing arts world since early spring, the pandemic claimed another victim in that field.

The Flywheel Arts Collective, which had made its home in the city’s old Town Hall for 10 years, could no longer afford to pay the rent after being unable to stage any concerts or others events since March — so members said they’d have to leave.

But to paraphrase Mark Twain, reports of Flywheel’s demise have been premature. Members of the volunteer, DIY-group produced a few outdoor shows last year at Forbes Library in Northampton, an indoor one at a Greenfield record store, and a fourth concert at Indian Orchard Mills, an old Springfield industrial building now housing multiple small businesses and other tenants.

Earlier this month, Flywheel produced its biggest show since before the pandemic, the experimental rock trio mssv and two supporting bands, GLOYD and Vex Party, at the Northampton Center for the Arts.

Longtime Flywheel member Jeremy Smith says the collective continues to emerge from the worst of the pandemic and is looking for more opportunities to stage concerts this year, using a combination of “unconventional venues” and more traditional ones as circumstances permit.

For now, says Smith, the group is following its old model, before it first began staging shows in its own rented digs — initially in a converted storefront near the intersection of Holyoke and Maple streets in Easthampton, then on the lower floor of old Town Hall beginning in 2010.

“Flywheel started as the Valley Arts and Music Alliance in the late 1990s, and in those days we did shows in smaller places, like art galleries and record stores, that would give local and upcoming artists a place to be heard,” said Smith, who’s an archivist at the University of Massachusetts Amherst.

“That’s still our best option for now, though we’ve had some discussions about finding another place [to rent] where we could have shows and other events on a more regular basis,” said Smith. “We’re not there yet.”

The April 2 show at the Northampton Center for the Arts, in the “flex space” at the Northampton Community Arts Trust building at 33 Hawley Street, was well attended, Smith said, with an audience of about 150 people, and was a boost of confidence for the collective.

“We thought we could rent a bigger space for that show because we felt we could draw a pretty good audience, and that worked out pretty well,” he said.

For now, the collective, which Smith says still has a core group of dedicated volunteers planning and producing shows, will continue what it calls its “Inside/Out” series of shows — concerts and other events that will be staged outdoors and inside in different locations.

As Smith wrote last month is a press release for the mssv show, “It has been a long winter, but Spring is here, and for Flywheel, that continues to mean bringing as much independent, non-profit, volunteer-run, all-ages live music to the valley as they can get away with.”

“We’re still here,” he said. “We’re looking forward to seeing what we can do this summer.”

More information about Flywheel is available at flywheelarts.org and facebook.com/FlywheelArts.