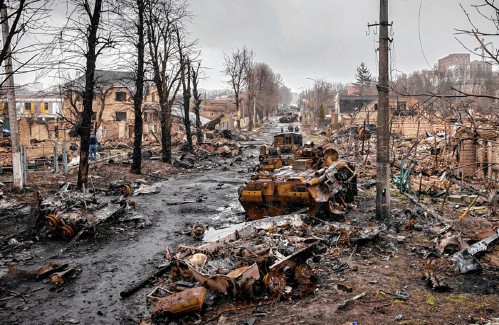 The Recorder – EarthTalk: The environmental toll Russia’s war on Ukraine is taking

Russia’s war on Ukraine is one of the worst humanitarian crises facing Europe since World War II. As Russian military forces continue their violent, murderous invasion, environmental organizations worldwide are raising additional concerns of the war’s far-reaching devastation to the environment.

Russia’s military activities threaten Ukraine’s environment through air, water and soil pollution. Toxic materials are released not only from munitions, but from the destruction of infrastructure, ranging from buildings and roads to pipelines and chemical storage sites.

Ukraine’s highly industrialized landscape intensifies the country’s risk of toxic pollution from destruction in and around industrial facilities like fuel storage facilities and hazardous waste storage sites. The Donbas region of eastern Ukraine knows this impact all too well: That area was the site of fighting after Russia’s annexation of Crimea in 2014, and is still suffering toxic contamination from leaking industrial facilities and munitions.

Ukraine is home to Europe’s largest nuclear facility, the Zaporizhzhia Nuclear Power Plant, and fighting near the plant has caused fires to break out. Russian occupancy of the Chernobyl nuclear site, also located in Ukraine, is also deeply concerning.

Russian movement in the area has launched radioactive dust from soil into the air, spiking radiation levels within the zone. While experts say there is no immediate danger to surrounding vicinities, the potential of nuclear disaster makes this war even more dangerous to the environment.

The country’s already deteriorating water infrastructure is further threatened by the war. On top of Russian forces cutting off vital water resources that civilians need for drinking and sanitation, damages to wastewater infrastructure are causing untreated sewage to pollute water supplies. On the other end of the spectrum, artillery fire compacted with dry conditions due to climate change make the region susceptible to wildfires.

“There is an urgent need for ecological monitoring to assess and minimize the environmental risks arising from the armed conflict,” says UN Environment Program analyst Leila Urekenova.

The war is impacting climate change talks as well. Since Russia is one of the top three fossil fuel suppliers in the world, some green groups worry the climate change agenda will be sidelined. Already, the crisis is showing that other countries, especially the U.S., need to be less dependent on foreign fuel, and fossil fuels in general.

Climate analysts hope, if anything good can come from the war, it will be the advancement of renewable energy investment to secure energy independence from nations like Russia.

In its present state, the environmental toll of the Russian war on Ukraine seems boundless. However, the full environmental impact may not be seen for generations to come. As Benjamin Franklin warned, “Wars are not paid for in wartime, the bill comes later.”

‘Easter miracle’ nobody died in Lawrence fire; at least 16 homeless