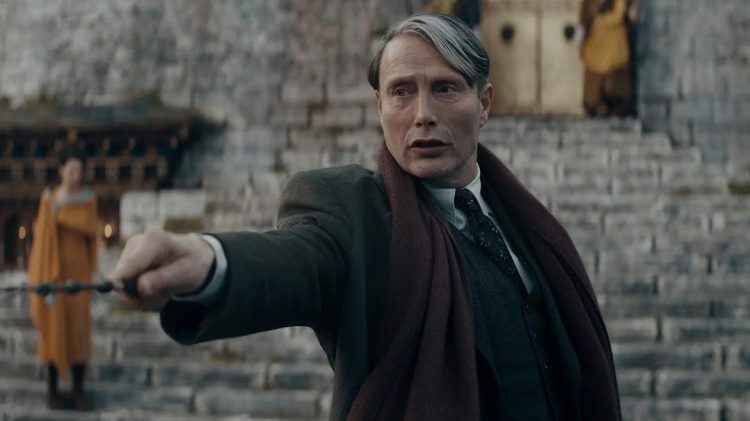 What a depressing descent it’s been for the “Fantastic Beasts” movies, the “Harry Potter” prequel franchise intended to expand the magical world of witches, wizards and muggles spun to life by J.K. Rowling.

The first film, “Fantastic Beasts and Where to Find Them,” was an assertion of gentle humanity and diversity set in an appealingly designed 1920s New York. Flappers, magic and cool animals, what’s not to like? But the third installment, “Fantastic Beasts: The Secrets of Dumbledore,” arriving four years after the second film, “Fantastic Beasts: The Crimes of Grindelwald,” is a bafflingly bad project that can only be described as “anti-cinema.” It has all the charm and fun of a contractual obligation, and dares to pose the question: what if an entire movie was gray?

Written by J.K. Rowling and frequent “Harry Potter” screenwriter Steve Kloves, directed by David Yates, who helmed the first two ‘Beasties’ and several ‘Potters,’ it’s clear that the powers that be are trying, hard, to regain the magic of “Potter.” “The Secrets of Dumbledore” has been hampered by scandal and COVID-19, and it shows. Embattled actor Johnny Depp, who played big bad Grindelwald, has been replaced by Danish actor Mads Mikkelsen, who is an improvement, and the only actor who seems to be energized in tackling this material. Writer Rowling has also courted controversy online with her regressive views on gender identity, and co-star Ezra Miller has faced some legal setbacks of his own. The entire film screams of “COVID protocols” too, with characters relegated to running around in front of green screen background and inexplicable settings that limit the number of actors in the frame at each time.

None of this excuses how inexplicably bland this film is though. It feels like a bad parody, a shadow of what a film is, not an actual film itself. The color palette is a dreary mud puddle of grays and browns, and there’s no sense of space or geography. It has no weight, no heft, no texture, no color, no sense of magic or wonder in the least. The story itself has no sense of stakes or resonance, and the actors range in affect from lifeless to dutiful to pained. It’s a long two hours and 22 minutes but it flies by simply because there’s no there, there.

The plot concerns Grindelwald’s grasps at power in the magical world because he essentially wants to start a race war with the muggles (humans). Set in the 1930s (or thereabouts), the fascist vibes are thick in the air as the motley crew of Albus Dumbledore (Jude Law), magizoologist Newt Scamander (Eddie Redmayne), Newt’s brother Theseus (Callum Turner), Hogwarts prof Lally Hicks (Jessica Williams), and muggle baker Jacob (Dan Fogler) set out to foil Grindelwald’s plans by confusing his visions of the future. Does the plan work? Not really, but honestly, who’s to say? After all the running around they still end up at some rigged election in Bhutan (why?) in which a magical creature will select the “pure of heart” to lead the magical world, if anyone still cares. There is nothing of consequence that occurs in this movie, as everyone involved seems to be going through the motions in order to cash a check and fulfill their obligations.

The icing on the cake is the audacity of Rowling to offer up a limp critique of authoritarianism, which is built on a foundation of bigotry and hatred for those deemed “other,” when she has used her public platform to dehumanize trans women and sow fear.

She might envision herself as Team Dumbledore, who is gay, by the way, but it’s clear she’s merely one of Grindelwald’s lackeys, which is perhaps why the whole film feels so inert and uncommitted. There isn’t any magic to be found in the “Secrets of Dumbledore,” so it’s best if we all move on, pretend like this never happened, and hope that those intended fourth and fifth movies are quietly put out of their misery.

‘FANTASTIC BEASTS: THE SECRETS OF DUMBLEDORE’

Poll: Only 17% of Mass. voters can name their county sheriff | News