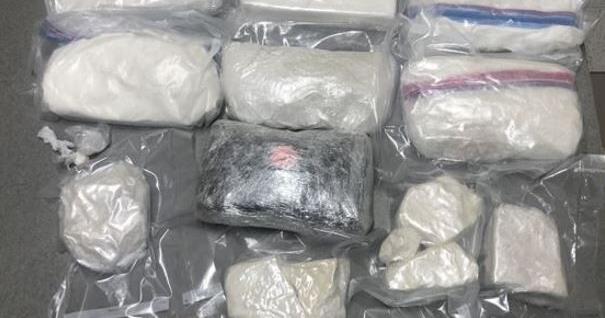 SALEM — A man who was deported from the United States in 2015 is facing multiple drug trafficking charges following his arrest last fall in a Lynn apartment.

Cesar Fernando Guerrero, 37, is being held on $500,000 bail — an amount a Salem Superior Court judge indicated he might have set even higher but for the prosecutor’s request for that amount.

“In five years,” Judge Salim Tabit said, referring to his time on the bench, “I’ve never raised a bail. This one comes close.”

The remarks came after prosecutor Lindsay Nasson described how an investigation by Lynn and state police and DEA agents led them to an apartment on Grover Street in Lynn with a search warrant on Oct. 21.

There they found a man living under the name Eric Duran, but who actually turned out to be Guerrero, she told the judge.

They also found 11 bags of cocaine totaling eight kilograms (17.6 pounds); and smaller but still trafficking-weight amounts of fentanyl and heroin. One of the packages of cocaine had a New York Yankees logo sticker on it and another had a BMW sticker.

Police estimated that the cocaine was worth $240,000 on the street, she said.

When taken into custody, he gave police the name Duran, she said, but his fingerprints matched those of Cesar Guerrero, who had been deported in 2015.

Defense lawyer John Benzan suggested that his client was simply in the wrong place at the wrong time and had nothing to do with distributing the drugs. “He was just present in the stash pad,” Benzan told the judge, requesting that he set bail at $25,000 and put him on an electronic monitoring bracelet.

Tabit, however, said there was nothing to stop Guerrero from cutting it off and fleeing, rather than risk a conviction and at least one 12-year mandatory minimum sentence. He also noted that Guerrero appeared to have trouble following court orders, having been removed from the country and then returning anyway.

A pretrial hearing is set for May 26.