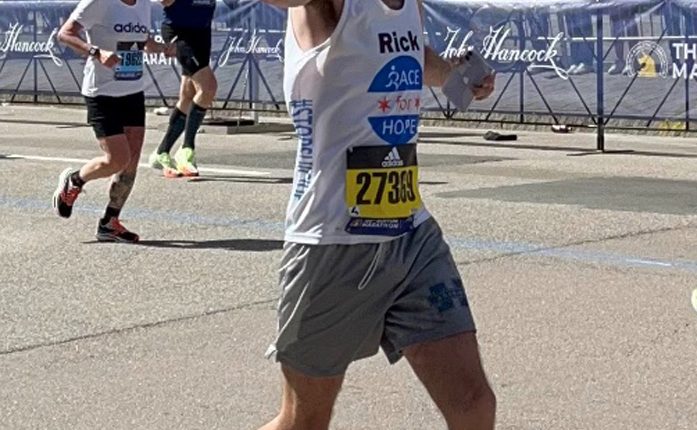 Sights and sounds from ‘the race of all races’

And it feels like I’m never going to come down from this runner’s high.

The 126th edition of the Boston Marathon was my seventh marathon, and I didn’t come close to a personal best time. My legs after Heartbreak Hill felt heavier than bricks, and I had some of the most painful blisters on my right foot. But it was the most fun I’ve ever had in a race.

And that’s because of the jubilant people from Hopkinton to Ashland to Framingham to Natick to Wellesley to Newton to Brookline and, of course, to Boston.

The 26.2-mile victory lap was the best party I’ve ever been invited to, as pumped up fans returned to the Boston Marathon course on Patriot’s Day for the first time in three years.

And because of that incredible energy, I made it. The crowds lining the course made me laugh and smile, distracted me from the pain, helping me make it down Beacon Street and all the way to Boylston Street where I got to see my wife, mom and friends, who gave me the biggest boost of all.

But enough about me. Here’s a snapshot of the best day of the year in the Boston area from other marathoners — from the bus out to Hopkinton to the emotions of finishing the journey later in the day.

The bus from Boston Common to Hopkinton

Nicole Pelletier said she was “weirdly calm right now” on the ride out to the start.

“But I know I’m going to cry when I cross the finish line,” the Boston teacher added. “I’ve wanted to do Boston forever.”

“I want to take it all in,” she said, adding that she was particularly excited for the Wellesley “scream tunnel.”

As the bus pulled off the highway to the Hopkinton exit, she said, “Now I’m getting really excited.”

She had been running the Providence Marathon every year, and then during the pandemic, she decided to start running multiple marathons a year. One of her goals is to run a marathon in every state.

Pelletier was running as a charity runner for Goodwill, raising money for youth programs in the Greater Boston area to help students with disabilities.

“With marathon running, I love the whole mentality of ‘I can do it,’ ” she said. “You can do anything you set your mind to.”

Getting ready in Hopkinton before the start

After running 26 mostly flat marathons, John Lauritsen from Denmark was anxious about how the Newton hills would affect him in his first Boston Marathon.

“Will my training have been enough?” the Copenhagen resident wondered while standing in the long line for the bathroom. “Could I have done some more?

“I’m used to flat marathons, and now with all these ups and downs, you wonder how much is that going to take off your time,” he added. “I have no idea what I can do in a hilly marathon.”

Amanda Garrison was “elated” after crossing the finish on Boylston Street. The Oklahoman beat her time from October’s unprecedented fall marathon, and she never walked, which was her other goal.

“I’m so happy,” she said. “The crowd support was amazing. It was literally awesome. The race of all races.”

It was Tiffany Poon’s first Boston Marathon and it was “amazing.”

“It was everything and more,” the Granite Stater said. “Just the energy the entire way was amazing.”

It was also Jamie Gladstone’s first time running Boston, and it might be the British resident’s final one.

“I feel great. I feel great, but just too many hills,” he said. “Those hills will just kill you, but I made it.

Give it a few months.