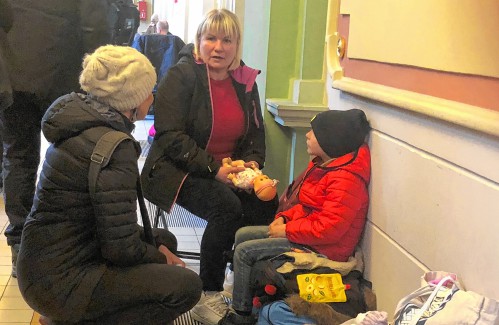 These are some of the adjectives Leverett couple Dean and Annette Cycon and Montague resident Nadya Tkachenko used to describe their two weeks in Poland, where they volunteered to help Ukrainian refugees fleeing the Russian invasion of their homeland.

“They said, ‘The whole world is helping us,’ and that was a beautiful thing,” Annette Cycon said following their April 2 return to the U.S. “They were amazed at the outpouring of support and goodness in Poland. It was the best of humanity meeting the worst of humanity.”

The Cycons and friend Tkachenko flew into Warsaw and spent much of their time at the border, providing assistance and services to those in need.

“It’s hard to sum up,” Tkachenko said on Friday. “Two or three weeks after the trip, I’m still processing and trying to put it into words.”

The three traveled with Jim Bryer, the fire chief in Jamestown, Rhode Island, where the Cycons have a vacation home.

Annette Cycon said she and Tkachenko started off by volunteering with World Central Kitchen, a non-governmental organization founded by Chef José Andrés that provides meals to people facing catastrophe. They peeled 500 pounds of potatoes, onions and carrots to feed the refugees.

“That was a very wonderful experience. There were volunteers there from all over the world,” Annette Cycon recounted. “It was an extraordinary organizational feat that the World Central Kitchen has created with 40 chefs and 50 volunteers.”

Dean Cycon, the owner of Dean’s Beans Organic Coffee Co. in Orange, said he spent his first couple of days in Poland helping people carry their bags a quarter-mile over the border to a bus that would transport them for processing and relocation. He said he noticed many of these refugees were elderly, so he bought a wheelchair to help them make that quarter-mile trek to the bus. He later donated the wheelchair to a Spanish aid agency for further use.

Tkachenko and the Cycons said they noticed housing — even temporary housing — was a critical need. They located some hotel and hostel owners and negotiated great deals to give at least 120 refugees a safe place to stay. This is how they spent the bulk of the money they have raised via GoFundMe (bit.ly/3IfHHQm). Donations are still being accepted and sent over to assist refugees.

The Cycons also said they handed out envelopes with $100 in cash, mostly to mothers in distress. Able-bodied Ukrainian men ages 18 to 60 have been ordered by their government to stay to fight the Russian onslaught. However, the Cycons said men with three or more children have been allowed to leave with their families.

Tkachenko said she saw countless men drop off their loved ones at the border, wave goodbye and turn around to fight the war.

“It’s devastating to witness that,” she said.

She mentioned she continues to send stipends to help people extend their hotel or hostel stays, buy essential goods and “figure out next steps.”

But the Cycons said the hospitality is not enjoyed equally. They said it is very common for fewer resources and less kindness to be shown to Roma, a nomadic ethnic group commonly referred to as Gypsies, though this term is now considered offensive. The Cycons said they helped a Roma family of 13 get into a hostel. They also said the humanitarian organization Salam Lab has been a tremendous advocate for Roma in Ukraine.

Tkachenko said she greeted many refugees at the border, speaking to them in Ukrainian or Russian.

“As soon as people heard a language they could understand, you could just see their shoulders relaxed, a smile returned on their faces,” she recalled.

Tkachenko said she used booking.com and Airbnb to find people places to stay.

She mentioned earlier on Friday she had received a voicemail from a Ukrainian rescue driver, who is pondering what is next for his people and his country. Tkachenko said she would love for American construction companies to consider sponsoring a building, project or truckload of construction materials once the war is over and Ukraine is ready to rebuild.

The refugee crisis is personal to Tkachenko, who was born and raised in Kazakhstan when it belonged to the Soviet Union. Her father was born and raised in Ukraine, and still has a large network of family and friends there. Tkachenko said she spent every school vacation in Ukraine and lived with her cousin in Mariupol — which has been decimated by the Russian invasion — for a year in high school. She said her brother, who lives in Kazakhstan but stays in touch with friends on the ground in Ukraine, recently texted her photos of the tattered remnants of the house she shared with her cousin. Tkachenko said her cousin died of cancer a couple of years ago, but that cousin’s widower has not been seen or heard from since March 1.

“So the hopes are not very high,” she said.

The situation is also personal to the Cycons, both of whom are the descendants of refugees. Annette’s mother, Wanda Kokurewicz, was born in Warsaw in 1929 and was part of the Polish resistance that fought the famed Warsaw Uprising. When the revolt failed, resistance survivors were sent to German death camps. But Wanda was saved by the Red Cross because a resistance leader convinced the organization that Wanda was the daughter of her own elderly mother who needed medical care.

Dean’s grandmother, Sarah Golembi, was a 6-year-old in 1906, when the family fled the massacre of Jews in the pogroms (violent riots) of what is now Belarus, and made it to Ellis Island. The Cycons named their daughter after Sarah.

Boston Marathon back on Patriots Day after pandemic disruption

For many, Easter marks return to in-person worship