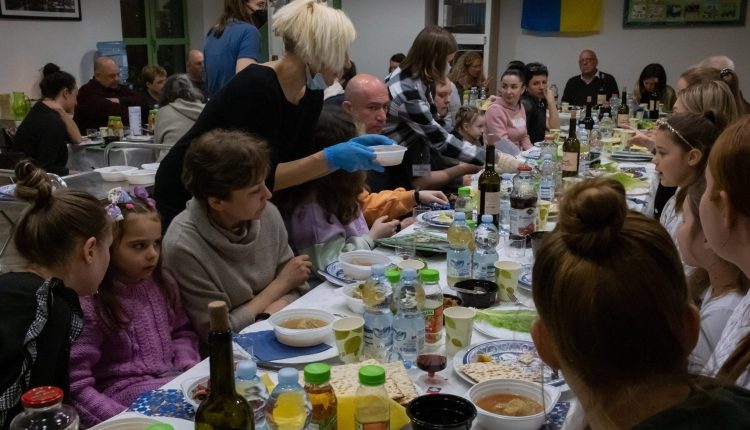 KRAKOW, Poland — “This is the third genocide in my family,” Nastya Lasna said. A 31-year-old Ukrainian refugee of Jewish and Armenian heritage, she fled to Krakow from Mykolaiv with her daughter shortly after Russia invaded Ukraine. Lasna quickly became a fixture at the local Jewish Community Center, where she recently helped lead a Passover Seder for about 40 other Ukrainian refugees.

The parallelism was striking: They were revisiting the story of the flight of the Jewish people, while living as refugees in a foreign land.

Krakow was a thriving center of Jewish life and culture for centuries. During the Nazi occupation in World War II, the city’s Jewish population was almost entirely wiped out.

Since the Russian invasion of Ukraine on Feb. 24, more than 150,000 refugees have come to the city. The community center’s small building has been transformed into an aid facility for the new arrivals, providing accommodation for 288 people, including 45 Jews — many of whom attended the Seder with Lasna on Friday.

Lasna was reunited with her mother and father, Viktoria and Victor, on the eve of Passover after they managed to leave Mykolaiv, the southern port city, on Thursday.

“I was watching them play Russian roulette with my house,” said Viktoria Lasna, who lived in Mykolaiv her whole life. “I finally said, ‘I will not give in to this game.’ ’’

They fled the next day.

From Krakow, they saw the news Friday that a bomb had exploded on a street corner near their building; it killed five people and wounded 15. “It could have been me walking with my granddaughter,” Viktoria Lasna said between sobs.

Amid the horror, the overwhelming symbolism of the Passover holiday was not lost on her. She offered a phrase from a song in Hebrew, which she learned as a child: “All the world is a narrow bridge, and the most important thing is to not be afraid.”

In the Passover story, the Jewish people flee Egypt with almost no notice. Tatiana Bolldanova, 68, escaped her home in Darnytskyi, on the outskirts of Kyiv, the Ukrainian capital, after a missile hit nearby.

“We left within several hours,” she said. “I fit my life into a small suitcase.”

Ukraine and Poland share tragic Holocaust histories. During World War II, the Nazis killed 3 million Polish Jews; in Ukraine, 1 million. Mobile death squads in Ukraine, which were called Einsatzgruppen, slaughtered Jews as they moved from village to village. Many of those killed were buried in mass graves.

For some, leaving Ukraine for Krakow was like stepping from one Jewish grave site to the next.

“It is in our blood to flee,” Jacob Tamarkin said between tears. Tamarkin, born just after the end of World War II, said he had recently restored a memorial plaque at a Jewish cemetery in his village, Vasilkov, about 20 miles outside of Kyiv. His father had helped build the cemetery in the 1950s to rebury the Jews who had been killed in the town.

Seeing fresh graves being dug around the outskirts of Kyiv was like watching history repeat itself, he said.
This article originally appeared in The New York Times.