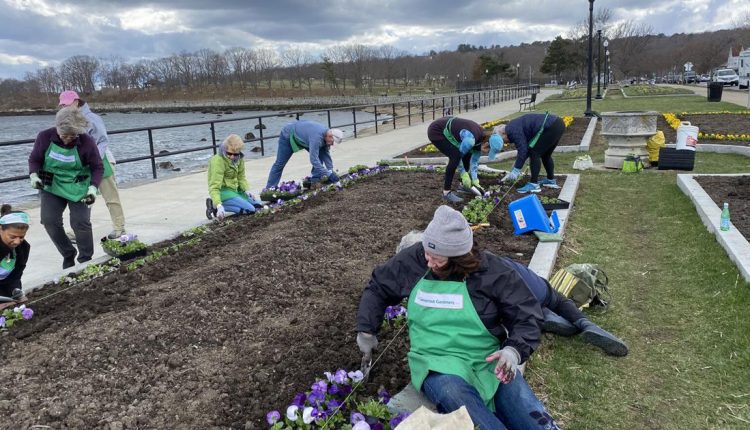 Gloucester’s had plenty of rain lately, and that’s a good thing if you’re a pansy. Pansies are fine with rain. They’re also fine with shine and shade. They’re hardy little blooms, says Susan Kelly of Generous Gardeners, who along with her cadre of green-aproned volunteers has been planting pansies by the thousands on Stacy Boulevard this past week.

She and her “lieutenant” Antonietta Calabrese have been leading the charge, armed with shovels, spades, hoes, weed whackers, elbow grease and whatever else it takes to do what the nonprofit Generous Gardeners does. and the volunteers will be be out there every day until some 17,000 pansies —15,000 on Stacy Boulevard, and another 2,000 spread out through Gloucester — are planted.

And don’t fret, Gloucester. Kelly says “the tulips are coming,” 25,000 strong, once again transforming Stacy Boulevard’s quarter mile of formal garden beds into a little patch of Paris in the spring.

People have been asking, Kelly told the Times, about the worrying presence of tarps lingering through the end of March on tulip beds surrounding the Fisherman’s Wives Memorial. Do the tarps mean fewer tulips this year?

No way, says Kelly, but those beds are particularly vulnerable to seawater, and last year that salty seawater saturated the life out of the beds, preventing tulips from blooming.

The city Department of Public Works came to the rescue, removing the tainted soil and replacing it with “fresh, beautiful soil,” she says. But because the pansies — planted from flats grown over the winter at Nunan’s Greenhouse in Georgetown — are hardier summer perennials, they will fill those beds this season.

The simplest way to explain this science of soil and stem, as Kelly describes it, is to say that tarps would have smothered the tulips. But that will not prevent Generous Gardeners from this year once again giving Stacy Boulevard’s waterfront its glorious annual rite of spring. The volunteers plan to plant 25,000 tulips this year.

Kelly — who over the decade since founding Generous Gardeners has grown her volunteers from three friends plucked from her exercise class to 80 of “the most fantastic women,” — says she loves “what they do, what we do, what I do.”

Which is why the donors tend to be as generous as the gardeners. If you happen to see a flowered white pickup truck with a license plate that reads “TULIPS,” it belongs to Generous Gardeners, and was a gift from supporter Jan Crandall. A gardener herself, when she died last November at 86, Crandall requested donations be made to Generous Gardeners.

The donations came, literally by the truck load. and the truck, in prettily painted letters, reads: “Powered by Jan.”

Joann MacKenzie may be contacted at 978-675-2708, or jomackenzie@gloucestertimes.com.