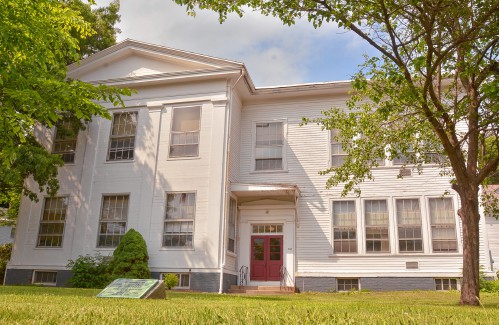 WILLIAMSBURG – Town residents will be able to get an update on the Mill River Greenway project and provide feedback on it and adjacent projects at a community forum on Sunday at the Town Offices in Haydenville.

The event will take place from 2 to 4 p.m. in the auditorium on the second floor of the Town Offices. It will feature a slide presentation followed by a mingling portion where people can ask questions and give feedback on five projects that are a part of or adjacent to the Mill River Greenway.

After closing in December, The Links at Worthington reopened on Wednesday — allowing its patrons to enjoy food, alcohol and golf on its premises.

“It’s gone well,” said Helen Pollard, who co-owns the golf course with her husband David Pollard. “People are behind us.”

The Pollards purchased the course, an institution in the Hilltowns, in 2018.

For the past several months, the course and the town have been involved in a dispute over the businesses’ liquor license, with the town choosing to withhold the license over disability access issues at the course’s clubhouse.

Last week, the Select Board voted to return the license with conditions, the main one being that the accessibility work be completed by June 10. Pollard said that the plan was always to make the clubhouse accessible, and that the COVID-19 pandemic delayed this work.

Because the kitchen has been affected by the renovations, only salads and sandwiches from the Chesterfield General Store are being served at this time at the golf course.

Patrons can eat or drink at the bar or in an outdoor tent, and the course is open from sun up to sun down.

The course also will host a concert series this year and Pollard said that last year’s concert series went well. Jim Messina will be the first concert in this year’s series on June 25.

“The venue is perfect,” Pollard said.

The Hilltown Memory Cafe will be featuring folk and Celtic music from the musicians Starr Adams & Ray Lequin of the group Wild Thyme on April 27.

“Starr’s a friend of mine,” said Kathleen Peterson, chairwoman of the Huntington Council on Aging.

She said that the COA is collaborating with musicians and promoters around the area to find people to play at the Memory Cafe.

“Just getting the names of people,” Peterson said.

And she said that Adams and Lequin will be playing Irish music at the cafe on April 27.

“We’re mostly a traditional Celtic group,” Adams said, speaking of Wild Thyme, which is a five piece as a full band.

However, she said that Blues and old-time fiddle music will be included in the set as well.

Like all Memory Cafe events, the cafe featuring Adams and Lequin will take place from 2 to 3 p.m. at Stanton Hall in Huntington and is free of charge.

The Memory Cafe is open to all people, regardless of memory status, and also hosts a support group for those doing caretaking work for people dealing with memory issues. The program takes place every Wednesday from 2 to 3 p.m., and on the first Wednesday of every month the therapeutic artist Lori Bocon provides art instruction to attendees.