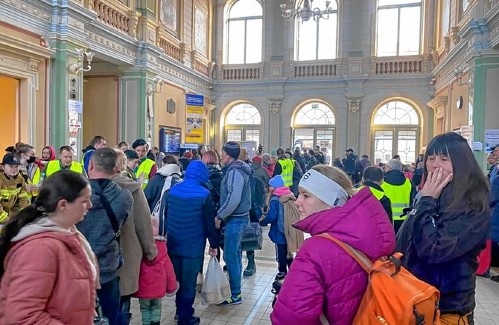 The Recorder – ‘How could I not?’: Montague woman journeys to the Ukrainian border to provide support, relief to refugees

When Russia violently invaded Ukraine on Feb. 24, 2022, very few predicted how rapidly the crisis would escalate, leading to over 7 million people being displaced or fleeing the country. Montague resident Nadya Tkachenko felt powerless, but she also experienced “almost a visceral pull” back to her homeland to help Ukrainian refugees.

This led her to board a plane to the Polish border a month later, accompanied by her friends Dean and Annette Cycon of Leverett and Jim Bryer of Rhode Island. The group stayed for two weeks contributing to a wide range of relief efforts.

Tkachenko was born and raised in the former USSR in what is now Kazakhstan. Her father is Ukrainian and her mother is Russian. Every summer her family traveled to Ukraine to visit her father’s family. In high school, Tkachenko studied in Mariupol, Ukraine. She came to the U.S. for college, studying at Middlebury College, and is now married with four kids, two of whom, sophomore Tychon and freshman Maya, attend Amherst Regional High School.

Today, she is a holistic life coach whose mission is “to help people live healthier and more fulfilling lives.” She teaches the practices of yoga and Ayurveda. During the pandemic, she created an online program meant to help people make changes in their daily routines to improve sleep, energy, and health in general.

Tkachenko spent the first few days of her trip in Krakow, Poland attending “close the sky” rallies, helping distribute school and art supplies at a refugee site called Center for Ukrainians, handing out envelopes of money raised through her fundraiser at a train station, and connecting with refugees.

The next two days were spent at the World Central Kitchen peeling and chopping hundreds of pounds of onions, carrots, peppers, and potatoes and stirring “the biggest pots of food I’ve ever seen.”

The World Central Kitchen was founded by José Andrés in response to the 2010 earthquake in Haiti. Today it is a highly orchestrated organization that prepares food on the frontlines of natural disasters and war zones. WCK began serving food within hours of the initial Russian invasion and is now continuing to serve food at eight border crossings.

Tkachenko and her companions next moved to helping out at the border. Her fluency in Ukrainian and Russian was of help there. “I started asking people I met in Russian/Ukrainian how I could help,” wrote Tkachenko in a Facebook post. “You could just see their shoulders drop and the whole body relax as they heard a language they could understand.”

Tkachenko and her group continued to pass out stipends as well as help transport people to buses, install Polish sim cards, take care of children, carry bags, and hand out supplies.

A lot of what Tkachenko did was listen. Much of her Facebook page focuses on the stories of the people she met. Part of Tkachenko’s job was to be there as emotional support.

“Many people just wanted to talk, to tell me what happened, to cry, to feel understood and held,” she wrote in one post.

After realizing that one of the biggest problems refugees were facing was what to do after crossing the border, her group took a train to Krakow and started focusing on providing housing for refugees.

Together with her friends, Tkachenko worked with an organization called the Salam Peace Lab, as well as a hotel group, to coordinate renting a whole hostel with 100 beds.

Many of those they settled in this hostel are Roma refugees who have been discriminated against by both Ukrainians and residents of the countries they have fled to.

The group’s last couple of days in Poland were spent back at the border.

Returning to Massachusetts, Tkachenko’s life here has been harder than she thought. “Partly it’s just culture shock,” said Tkachenko, “and partly it’s processing the horror stories.” Tkachenko is very aware that the conflict still continues and the people she met at the border still need help.

“A trip like that changes you and brings some of your values to light while causing you to question others,” said Tkachenko. “My new normal is not going to be the same.” She said she was pushed to think about other values and human needs that we don’t necessarily think about.

The mental, emotional, and spiritual impact of the trip has been taxing. “It was challenging and empowering at the same time to be absorbing all of the stories and experiences people shared,” said Tkachenko. “It was hard to hear things from refugees and stay positive.” She knew how much trust they put in her and it was one of her responsibilities to hold all of the emotions.

Despite that, Tkachenko was inspired by the scale of human goodness, passion, and generosity that is being offered. “While I feel really disturbed and saddened by the war, [my trip also] confirmed that there is so much goodness,” she said.

Tkachenko also feels that in the complexity of this conflict it’s important not to dehumanize Russia as a whole and instead to separate the country from the individuals. “Not every person is part of the conflict and we need to be careful not to label,” she said.

Tkachenko’s work as a holistic life coach has also been impacted by her trip. “I still feel passionate about coaching people in healthy living but there are moments where I feel a disconnect knowing there are people who have nothing to eat,” said Tkachenko. She wants to bring more conversations about purpose and compassion into her work.

Before leaving in mid-March both Tkachenko and Annette Cycon created separate fundraising pages. It was important to them to each have their own because they have unique stories and reasons for their efforts that each wanted to keep at the forefront.

How they distributed the funds was important. “Ukrainians are very proud people and we had to figure out how to make taking the money feel acceptable,” said Tkachenko. “Using the word ‘stipend’ as well as having children decorate the envelopes helped with that.”

Tkachenko has also used the money to find housing for individual families, to outfit a playroom in the big hostel that was rented, and to buy spring clothes for refugees, as many had left with one winter outfit.

Both fundraisers are still active and Tkachenko is still buying war supplies like helmets and bulletproof jackets on a daily basis and sending them to the border.

Tkachenko is also in contact with people she knows in Ukraine who help ensure the money she raises has a direct impact. “I am connected with trusted friends in Ukraine, personal friends, former classmates of my brother,” said Tkachenko on the info page for her fundraiser. “They are all involved in various grassroots and resistance movements and they help me direct these funds where they are needed most.”

Tkachenko hopes to return to Poland as early as May to continue her efforts.

You can find Nadya Tkachenko (or her travel partners the Cycons and Jim Bryer) on Facebook, to keep up to date with their work. If anyone wants to help the cause, donating to either Tkachenko or the Cycons’ fundraiser and to the World Central Kitchen will have a direct impact.

This story was reported and written by Rebecca Marshall, who is a senior at Amherst Regional High School and is planning to take a gap year before going to Carleton College the following year. The story first appeared in The Graphic, the ARHS school newspaper.

Occasional violence erupts at May Day rallies across Europe