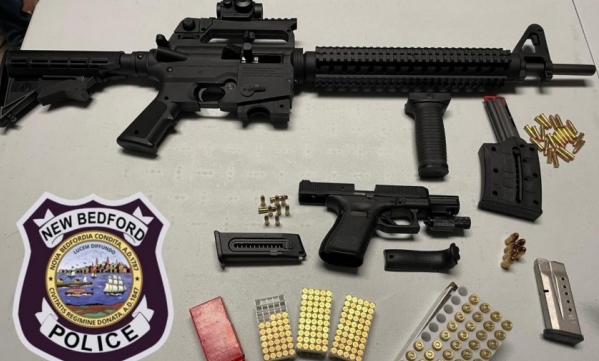 “New Bedford police detectives have seized two firearms from a juvenile, marking nine illegal weapons taken off of the streets since the beginning of the month.

On May 10th, 2022, detectives assigned to the Organized Crime Intelligence Bureau executed a search warrant at an apartment in the “Shawmut Village” housing development. The target of the investigation was a juvenile.

After being stopped outside the residence by detectives, the juvenile was found to have a waistband-held Glock 44, .22 caliber handgun loaded with 10 rounds of ammunition.

The juvenile was taken into custody and charged with a variety of weapons related offenses including carrying a loaded firearm and ammunition without license, possession of a high capacity feeding device, and improper storage.

The arresting officer was Samuel Algarin-Mojica.

Since May 1st, New Bedford police officers have now taken 9 illegal firearms off the street and out of the hands of those who would do harm. If you have any information on criminal activity in your neighborhood, the New Bedford Police Dept. wants to hear from you. You can leave an anonymous tip on our voicemail at (508) 991-6300 Ext. 1. You can also leave a tip at our website, www.newbedfordpd.com.” -” -New Bedford Police Department.

Will ARPA funds come to the rescue?