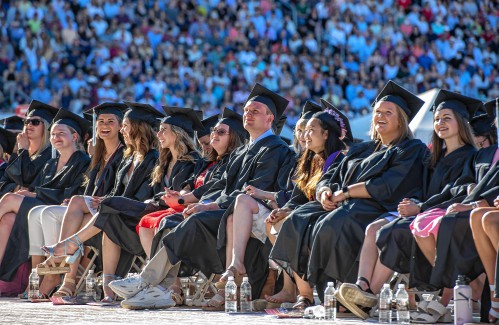 AMHERST — “I want you to fall in love,” said U.S. Rep. Jim McGovern in his keynote address at the University of Massachusetts Amherst commencement Friday, one of the many seeds of wisdom he conveyed to thousands of graduates.

None of that was lost on Sarah Herron from Melrose and Brendan Mulrooney of Long Island, New York.

An hour earlier, the couple were with thousands of others lining up in the parking lot and grass outside McGuirk Alumni Stadium. The couple has been in love since day one of freshman orientation.

“It started with a very animated conversation about Lilo and Stitch,” said Mulrooney, who then made Herron laugh so hard she spit out Cheerios. They hope to find an apartment in Queens, seeing as how Herron just got accepted to LIU, a hope they shared with both sets of parents this week.

Does the world and its turmoil make them fearful of the future?

“I’m not scared, cause I’m in school,” said Herron. But Mulrooney admitted to some fear: “I’m no longer a student so I’m unemployed,” he said with a laugh.

Herron has no doubt that the couple will stick together and make it. “You have a 100 percent path to go down when you have somebody,” she said.

“Definitely not ready to leave UMass,” said wildlife conservation major Molly Fishman of Marietta, Georgia. “It went by in the blink of an eye.”

Fishman came to UMass to experience snowstorms. “I love the snow,” she said, noting she doesn’t get much back home. “When I was in the seventh grade we were out of school for a week with three inches of snow!”

Molly Tierney of Pittsfield said she was excited about commencement but sad. “I’m dreading the end,” she said. “I want to stay here as long as possible. The food was always good and the hockey team — wow!”

But of all these 7,000 grads lining up out in the bright sunshine, there has to be somebody who’s at the end of the line. That would be Mike Phillips of Weymough, not something he planned; he was just enjoying the shade by the trees. He says he’s psyched to graduate but, “I’m horrified. But one one thing you have going for you at UMass is you have to be independent.” Phillips plans on going into psychiatry with a focus on addiction.

“The way humans tick is one of the biggest mysteries of life,” he said.

When you see 7,000 people spread out in a parking lot, it’s hard to imagine how they’re all going to fit on a football field, but in they marched to stirring accompaniment by the UMass Commencement Band. Some parents tried to get their grads’ attention in the crowd by good old-fashioned yelling, but most saw the folly in that and just texted: “We’re over here right under Section 14! See us?”

“Bless you,” said many, as one mother dispensed the product a gob at a time to outstretched hands like a lunch lady back home.

The endless winds of April continued but the breeze Friday was just enough to rustle the flags and banners.

Student speaker Emily Przybyla, a biology major from Ellicot City, Maryland, said, “One thing this pandemic has taught us — we’ve got real superheroes, and they come in scrubs and white coats and first responder uniforms. This diploma is a testament to our resilience and success. We have lived through events that will fill future textbooks.”

“We’ve got huge but not unsolvable problems,” McGovern, the keynote speaker, said. “This is your moment.”

McGovern was one of the last people to make it out of the House of Representatives during the Jan 6 riot at the Capitol.

“I came face to face with those who were there to hurt us and overturn a certified election. Your future and the future of democracy are linked,” he said.

“Here’s the deal,” McGovern said. “It’s no longer safe to think that your right to vote will be around when you need it. Democracy is in crisis. I got pepper sprayed outside the White House. I was arrested for civil disobedience three times,” he said, as the crowd roared. “I’d like to thank my probation officer for allowing me to be here.”

He urged the grads to fight for democracy. “Get back up when you get knocked down. Losing with dignity and grace matters,” he said, eliciting cheers with a perceived criticism of Trump.

“You have earned your degrees in the middle of a once-in-a-century pandemic,” McGovern said. “Don’t give in to cynicism and doubt. The power of the people will always be stronger than the people in power.”