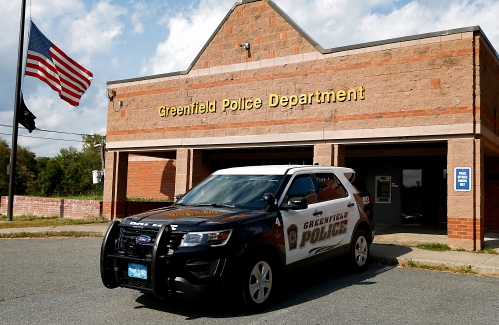 GREENFIELD — Some residents are calling for city officials to accept a recent verdict that found the Greenfield Police Department racially discriminated against a former police officer — and to acknowledge that the city isn’t exempt from racism.

“I’m validated and surprised the court of law actually has found what I, and many people, have known for years, which is there is racial discrimination going on at the Greenfield Police Department,” said Marianna Ritchey, a member of the Greenfield People’s Budget, a community group that advocates for “community-led solutions to public safety.”

The verdict delivered May 6 found the Greenfield Police Department and Chief Robert Haigh Jr. discriminated against former Greenfield Police Officer Patrick Buchanan, the department’s only Black officer at the time, when he was denied a promotion. Buchanan was represented by attorneys Michael G. McDonough and Timothy J. Ryan. Greenfield and Haigh were represented by attorneys Erica Brody and Leonard Henry Kesten, and are reviewing the verdict.

As a result of the jury’s verdict, Buchanan was awarded $92 ,930 in lost back wages and $350,000 for emotional distress. He was not, however, awarded punitive damages. On the same day, Mayor Roxann Wedegartner put Haigh and Police Lt. Todd Dodge on paid leave.

According to the verdict, the “city of Greenfield discriminated against (Buchanan) because of his race in connection with the promotional process between September 2014 and October 2015.” The jury found Buchanan was not promoted in 2014 due to “racial animus.” The complaint against the city was first filed about five years ago in Hampshire County Superior Court by Buchanan and Dodge.

Members of the community who feel similarly to Ritchey plan to gather outside City Hall on Monday in advance of a special meeting of City Council scheduled at the mayor’s request. The agenda for the 6 p.m. meeting seeks a vote to enter executive session.

“The reason for the executive session is simply to update the city councilors and give them accurate information on the verdict,” Wedegartner said. She added City Council “has every right to understand the verdict in a timely way … so they can understand how the verdict came about and what the possible recourse actions are for proceeding with the case.”

The gathering outside City Hall on Monday, however, comes in reaction to past statements made by Wedegartner and Haigh, suggesting the possibility of appealing the verdict.

“On the surface, this does not look like the right move,” said Emily Greene, a member of Racial Justice Rising.

In her reading of the case, Greene said, she agrees with the jury’s finding that racism played a role in Buchanan being denied a promotion.

“I feel confident to speak to the fact we (Racial Justice Rising) feel like there’s something not right in this whole scenario,” she said.

Referencing court documents available online, Ritchey said the trial brought to light the “terribly bad behavior” of other officers in the department who were not disciplined for serious offenses, including driving under the influence of alcohol and not securing firearms.

“I think it’s pretty outrageous the mayor did not immediately fire the officers that have been involved in direct racial discrimination,” Ritchey added.

Monday’s meeting was originally planned for May 11 but was rescheduled to correct an error in the purpose of the executive session, Wedegartner explained. Originally, the purpose for an executive session was for a discussion on “the reputation, character, physical condition or mental health, rather than the professional competence, of an individual or to discuss the discipline or dismissal of, or complaints or charges brought against, a public officer, employee, staff member or individual.”

The posting for the meeting on May 16 states the purpose for the executive session is related to “collective bargaining or litigation.”

Wedegartner said May 16 was the best night, as it was the only date next week that another meeting of councilors hadn’t already been scheduled. Additionally, she added, the City Council meeting on May 18 already has a significant agenda, as councilors will deliberate on the proposed fiscal year 2023 capital budget.

At least one city councilor, however, objected to the lack of scheduling effort that was made to accommodate councilors. In an email to City Clerk Kathy Scott that was forwarded to city councilors, Precinct 4 Councilor John Bottomley — who noted he wouldn’t be able to attend the special meeting due to a scheduling conflict — questioned why the standard practice for checking the availability of councilors hadn’t been followed.

“Like you, I take my job as a city councilor seriously,” he wrote. “I have not missed a single council meeting since taking office. The manner in which this special meeting is being handled is inconsiderate and disrespectful.”

In the same email, Bottomley urged councilors to vote “no” to opening an executive session next week.

Bottomley said it was later brought to his attention that his email contained an Open Meeting Law violation.

“I was put in a really difficult situation,” he said. “I wasn’t aware of (the violation) until I was told. It’s hard having these discussions … when meetings are getting canceled.”

He noted that while the mayor can call for an executive session, it can’t open without a City Council vote.

Wedegartner said one city councilor’s inability to attend a meeting was not a reason to notify councilors to find a new date.

“We decided it would be important to update councilors in a timely way,” she emphasized. “They have several options, and appeal is one of them. That’s all I’ll say, but I think they need to hear, as do I, from Attorney Kesten.”

She clarified that ultimately, the decision on how to proceed is not within City Council’s authority, but the mayor’s. Wedegartner also noted it’s not an unusual process to appeal a verdict in a civil suit.