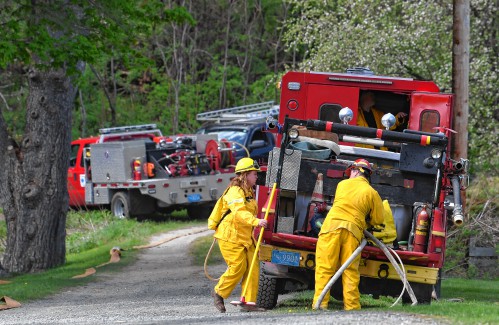 Area fire chiefs say the number of brush fires their crews are battling this season is about typical, but the amount of acreage damaged has been far greater than average due to high winds, low humidity and a prolonged winter that has kept vegetation drier than normal.

Brush firefighting is more labor intensive than quelling a structure fire, as it often requires personnel to reach remote areas and lay out hundreds of feet of hose, and it is common for several departments to be called in to help get the fire under control.

“I would say that the season itself has been pretty normal. It’s just been late. Typically, we are out of brush season by this time, usually no  later than the end of April,” Greenfield Fire Chief Robert Strahan said. “But for some reason we had a longer winter. It didn’t green up immediately and so the season seems to be a little later this year.”

He explained plant life develops moisture as it becomes greener and more lush.

“When you have a field and it’s coming out of winter, it’s a dry field and the grass is dead, and so the fire spread goes a lot faster,” he said. “As it greens up, there’s moisture.”

Strahan said brush fires have various causes, including campfires, permitted burns that become out of control, lightning strikes and the improper disposal of smoking materials. He said his crews recently responded to fires started by a spark by a passing train and by a downed power line. This activity, he said, has been exacerbated by significant winds and temperatures in the 70s and 80s.

Even Vermont is not immune to brush fire conditions, as Strahan estimates 11 to 14 acres were burned in Halifax a few days ago before firefighters got the blaze under control. Assistance came from various Franklin County departments, including, Strahan said, a strike team of five brush trucks that went to the state line near Colrain. Lt. Jason Haskins, the Greenfield Police Department’s licensed drone pilot, assisted with a scene overview.

“I can tell you it takes a tremendous amount of resources from local departments to safely contain and extinguish … the fires that we’ve been seeing,” he said, adding that he expects the recent activity to slow down in the coming months.

“Any little thing can create a brush fire,” he said. “Luckily, our citizens have been phenomenal with keeping cooking fires contained.”

Hartnett’s department was dispatched to a large brush fire off West Camp Road, threatening a business off of Industrial Boulevard, at approximately 10:15 a.m. on Monday. All mutual aid companies were used and the 2-acre blaze was under control by 11:40 and extinguished by 12:30 p.m. There were no injuries or damage reported. The incident was caused by nearby power lines.

Hartnett also said it is not uncommon for permitted burns to get out of hand during open burning season, which ended May 1. Orange Fire Capt. Mark Fortier said a fire chief can approve an agricultural burning permit if the permit holder can prove he or she has more than 1 acre of land and uses it for agricultural purposes to generate income. He said he considers a large brush fire to span a quarter- or half-mile in area.

“I would say anecdotally that there has not been any increase for our jurisdiction but, listening to the county,” Fortier said, “I would say there has been in increase in brush fires and the severity of the brush fires seems to have increased this year.”

The Orange Fire Department responded to the woods along the railroad tracks behind Anne’s Dairy Drive In at 360 East Main St. at roughly 5:30 p.m. on Tuesday. Firefighters found a 20-by-20-foot fire starting to spread due to the wind conditions. The fire was extinguished, with the total burn area reaching 40 feet by 20 feet. The cause was determined to be an intentional campfire set along the river by an adult who had consumed multiple alcoholic beverages. The wind picked up and quickly spread the fire.

Fortier recalled the August 2020 Tully Mountain brush fire, which reignited after crews spent four days battling flames. Remnants of discharged fireworks and evidence of recent camping were found near the fire’s origin. Fire Chief James Young said at the time that “duff” — the layer of decomposing organic materials lying below a layer of freshly fallen twigs, needles and leaves, and immediately above the mineral soil — was a “tinderbox waiting to go up.” The fire wasn’t large in size but burned deep into the ground, making it difficult to snuff out. A similar brush fire on Joshua Hill in Leverett spread to more than 60 acres earlier that summer.

Unlike his counterparts, Dennis Annear, the fire chief for Rowe and Charlemont, said Friday his towns have seen a greater number of brush fires, with five calls in the previous three days. Later in the afternoon, Annear responded to a brush fire in Charlemont.

“I think this year’s a little exceptional,” he said. “Green-up has seemed to take a little longer up here this year.”

Annear blamed vegetative dryness caused by low humidity and a lack of rain. Humidity, he said, is often unpleasant to humans and animals but adds vital moisture to soil and plants.