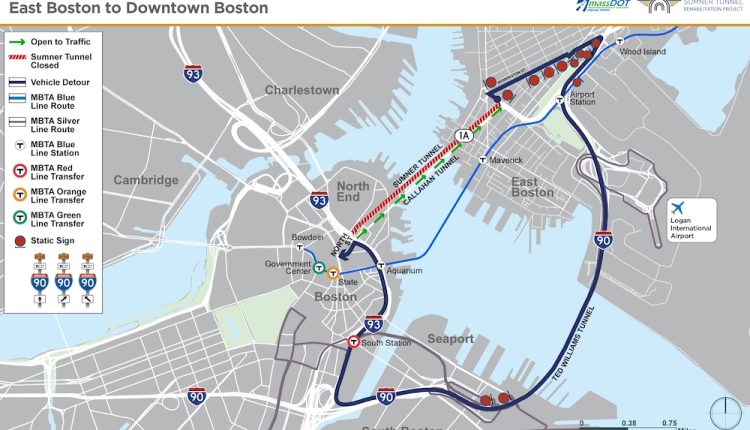 Traveling between downtown Boston and East Boston, including Logan International Airport, is about to become even more of a headache.

State transportation officials are preparing next month to kick off a major, year-plus rehabilitation project in the Sumner Tunnel, which is in a state of “disrepair” 87 years after it opened as the first traffic tunnel in Massachusetts.

The work will shutter the underground tunnel that runs one-way from East Boston to downtown Boston from Friday night through Monday morning for three dozen upcoming weekends, then for four continuous months next year, and then for another series of weekends in late 2023.

Instead of cruising underneath Boston Harbor to get from East Boston or the airport to the city center and points north and west, the thousands of motorists who use the tunnel on a given day will be rerouted to the Ted Williams Tunnel or on a winding detour into Revere and Chelsea.

The Sumner Tunnel, MassDOT warns in its official summary of the project, is “well beyond patches and repairs: the only way to keep it in service is with a top-to-bottom restoration.”

And to accomplish that, drivers and residents of nearby neighborhoods will be asked to put up with an unpleasant stretch of heightened congestion and longer rides.

“In our experience, to do it in these windows with an intense period of work allows us to not have this extend over much longer periods of time and much more consistent inconvenience,” Transportation Secretary Jamey Tesler said Thursday. “It is a more intense period of time. It will undoubtedly test people’s patience during it, but we believe this is the best way to get this done with the least disruption to people.”

The roughly $160 million project will kick off June 10, the first of 36 weekends — excluding holidays — in which the tunnel will close at 11 p.m. Friday night and remain offline until 5 a.m. Monday morning. MassDOT will completely close the Sumner for four months between May and September 2023 in the project’s second phase, then shutter it for a still-unspecified number of weekends in the fall and winter of next year in phase three.

That approach mirrors a strategy the MBTA has embraced in recent years, imposing more concentrated periods of inconvenience to complete projects in a shorter timeframe than would be possible with more limited overnight or weekend work.

Closing the Sumner for 40 weekends rather than for four continuous months next year would extend the project by 10 more months, MassDOT estimates.

Whenever possible, MassDOT will urge travelers to turn to public transit rather than driving along detour routes. The Sumner Tunnel project also creates pressure on the MBTA, which will replace Blue Line trains between Wonderland and Orient Heights with shuttle buses from May 22 to June 8 to repair the Suffolk Downs pedestrian bridge.

Both other underground motor vehicle tunnels spindling out of East Boston — the eastbound Callahan Tunnel that runs parallel to the Sumner and the both-directions Ted Williams Tunnel that winds toward the Massachusetts Turnpike in South Boston — will remain open.

Alternate routes are set for a flood of additional traffic due to detours. Drivers traveling downtown from Logan or other parts of East Boston will be diverted to the Ted Williams Tunnel, while those headed for I-93 northbound will be asked to follow Route 1A north to Revere’s Bell Circle Rotary, then wind through Chelsea and over the Tobin Bridge to reach the interstate.

Massachusetts Port Authority Director of Strategic and Business Planning Joel Barrera said the plan will put “a lot of pressure on the Ted Williams Tunnel.” He added that MassDOT plans to station tow trucks by the tunnel to ensure quick clearance of any crash that could slow traffic.

“We will become extremely dependent on the Ted Williams Tunnel,” Barrera said at a Massport board meeting Thursday. “At the end of the day, people will have to travel further and likely through more congested tunnels and bridges.”

Barrera said the rehabilitation will implement a “state-of-the-art, good connection through downtown” with better lighting as well as improved radio, mobile phone and GPS signals.

“This is a good and necessary project,” he said, noting the tunnel is almost a century old. “There’s a lot of deferred maintenance on it. Anyone who drives through it understands the sort of state of disrepair that is in that and will appreciate that the secretary and MassDOT are biting the bullet to move this $160 million project forward.”

The project is one of hundreds that will be funded in MassDOT’s 2023-2027 capital investment plan. Officials released a draft version of that spending outline this week, calling for steering $110 million toward the Sumner Tunnel work in fiscal year 2023.

Both MassDOT and the MBTA are returning this cycle to five-year plans for capital investments — which cover modernization, maintenance and expansion projects — after deploying one-year plans during the pandemic’s upheaval.

MassDOT’s 2023-2027 plan calls for a total of $14.7 billion in transportation project spending over the five-year period, more than half of which would go toward reliability. About a quarter would head toward modernization and the rest would be divided between expansion projects, Chapter 90 road repair aid for municipalities and planning, enterprise services and miscellaneous categories.

The department will accept public comment on its draft capital investment plan, including via several virtual public meetings, until June 8. MassDOT board members will be asked to approve a final version in June.