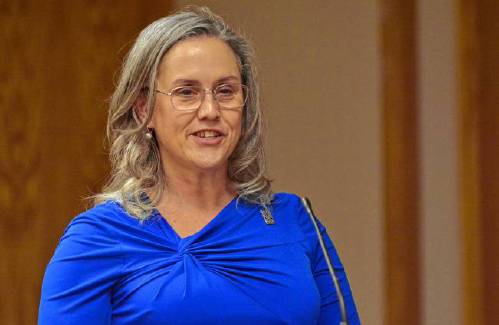 EASTHAMPTON — Mayor Nicole LaChapelle has proposed a $48.5 million budget for fiscal year 2023, an increase of 5.75% over the current year.

“This budget takes into consideration, as it always does, how to best stretch local dollars,” said LaChapelle at the May 18 City Council meeting. “And local dollars are more and more the funding source for everything a city does — property taxes, meal taxes. The amount of money from the state is shrinking.”

She further explained that the state is putting money into competitive grant funding.

In her budget letter, LaChapelle directed department heads to include all anticipated compensation without any cuts and show an expense budget increases of 1%, 2% and 3%.

Among those categories, the school district’s budget is proposed to increase by 4.63% to $17.89 million. Education takes up 36.85% of the proposed budget, according to LaChapelle’s 125-page spending plan.

The day prior to LaChapelle’s presentation to the council, the School Committee approved an $18.45 million proposed budget, which was a 7.91% increase from the previous fiscal year.

The May 17 meeting vote was the second the committee had taken on the school district’s budget after LaChapelle raised questions about whether the committee followed proper procedures under the city’s charter.

Superintendent Allison LeClair reiterated at the May 17 meeting that her proposal was a “needs-based, essential services budget.”

“This is a proposal that reflects the needs and priorities as identified by the district in accordance with school goals and areas of focus,” LeClair said.

Public safety’s proposed budget is $6.76 million, an increase of 19.96% from the previous year. This section of the budget includes police, dispatch and fire and ambulance as well as building inspection services.

The general government, which includes the City Council, mayor and city attorney, licensing, the auditor, assessor, treasure and central purchasing, technology, collector, human resources, city clerk, elections and registration, planning and building operations, is proposed to increase by 19.53% to $2.33 million.

The unclassified section includes contributory retirement, workers compensation, Medicare, employee benefits, liability insurance, the reserve fund and unemployment. This section of the budget is proposed to increase by 5.29% to $9.93 million.

Enterprise includes Sewer, Wastewater and Water departments as well as the enterprise reserve. This section of the budget is proposed to increase by 1.7% to $2.8 million.

LaChapelle’s budget has been sent to the Finance Committee for review and a public hearing will be held on Wednesday, June 15 at 6 p.m. The Finance Committee is scheduled to review sections of the budget starting with the Department of Public Works, Enterprise and Culture and Recreation on Monday, May 23 at 5 p.m.

Councilor Dan Rist also reminded the public that the City Council does not have the ability to increase any line items in LaChapelle’s budget.

“The city council has no authority to increase the budget as presented by the mayor. We only have the authority to cut it,” Rist said. “In all my years, and I have a lot of them, we have rarely, if ever, cut a budget that was presented by a mayor. Generally, a mayor is only able to present, rarely is a mayor able to present all of what a department wants, so cutting it further would be difficult.”