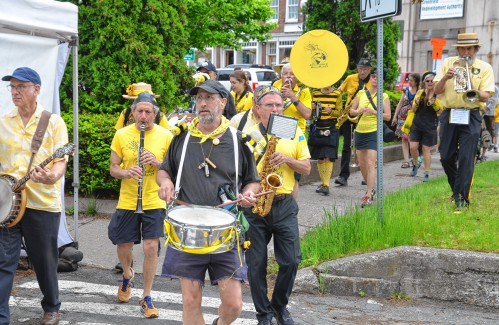 GREENFIELD – The buzz of excitement was palpable in the streets of Greenfield on Saturday.

With the Expandable Brass Band leading the way, festival-goers were given their first look at three new bees during the 12th annual Bee Fest, which celebrates the pollinators and the history of beekeeping in Greenfield.

Each year, a variety of bee-themed, family-friendly events are held around the city in celebration of Lorenzo Langstroth, the pastor of the Second Congregational Church during the mid-1800s, who developed the original vertical beehive with frames, which has been adapted for modern use around the world.

The celebration kicked off on Friday night with the opening of local art group Exploding View’s “BeeLines” exhibition at the Pushkin Gallery. Featuring both audio and visual interactive installations, the group wanted to convey the importance of bees through their motion and resilience. The group is composed of local artists Samantha Wood, Trish Crapo, Edite Cunha and Nina Rossi.

“For us, it’s trying to find our way through the pandemic,” Wood said, invoking honeybees’ communicative behavior and how that’s similar to people working together through dark times. “They come back to the hive and communicate how to survive.”

The exhibition featured four hanging installations that invited people to step inside and listen to a short audio clip exploring bee behavior and biology. Wood said these installations were designed to evoke the feeling of a bee entering a cell in a hive. Folks also were invited to take a look at a live bee hive frame, where the insects were wriggling about as they sucked down sugar water.

This is the third year Exploded View has created an exhibition for Bee Fest and with so much effort put into researching bees, Wood said her group has built up quite the repertoire of bee knowledge.

“Our group aren’t bee experts,” she said, “but it’s become a sub-specialty because of this festival.”

In attendance Friday was Sandy Thomas, the founder and lead organizer of Bee Fest, who said she was excited for Saturday’s events.

“It’s all just so joyous,” Thomas said ahead of Saturday morning’s activities. “It’s all about meshing education about bees and why they’re important,” while also raising awareness about their “plight” with bee populations falling across the world.

Saturday brought a packed morning schedule, which avoided the afternoon’s blazing temperatures, as families gathered by the Second Congregational Church and Greenfield Farmer’s Market to play games and make crafts before the Expandable Brass Band led a parade around.

“It’s a great thing to do, to be out at the Farmer’s Market and Bee Fest, especially with the kids, it’s great,” said band member Richie Davis. “It’s a perfect day for music and bees.”

Issac and Angela Mass, co-owners of Greenfield Garden Cinemas, said they love Bee Fest and the positive energy it brings to the city.

“Any chance to celebrate home is good by us,” Isaac Mass said. “There’s a lot of negative stuff out there, it’s really nice to have something that is only positive.”

Speaking in front of the bee in front of Greenfield Savings Bank, President and CEO John Howland said to the group that events like Bee Fest celebrate the artistic talent of the community and bring people downtown.

“I really appreciate what the town is doing to promote the arts,” Howland said. “I think it’s awesome and hopefully bringing people into our downtown.”

At the Greenfield Gallery, Chicoine said she was hopeful her bee, titled “Take Flight Through Reading,” inspires people to take joy in reading, which she said was one of her favorite activities.

“It’s spreading the enthusiasm of escaping into books, I hope people will get as much joy and inspiration from this as I did.” she said. “It’s an expression of how I am that we’re getting a new library.”