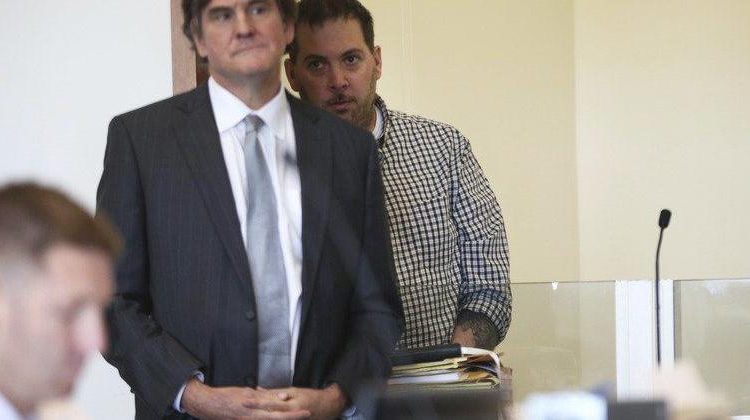 SALEM — Scott Smith was tearful when police showed up with a search warrant at his Salisbury home, looking for images of child sexual abuse, back on April 2, 2018.

“He broke down,” prosecutor Michael Sheehan told a Salem Superior Court judge on Monday. “He admitted he has a problem and needs help,” then directed the officers to a laptop and external hard drive in his truck, where investigators later found dozens of images of girls as young as toddlers being sexually abused.

But Smith, now 41, had an even bigger secret that day — he’d already lured a 14-year-old girl who lived nearby to his 4 Ferry Lots Lane home weeks earlier, where he gave her moonshine alcohol and then indecently assaulted her.  It was only after Smith was arrested on the child pornography charges that the girl’s mother went to police.

Smith took a different approach in that case, however — he admitted on Monday to a charge that he later asked another inmate at the Middleton Jail to help him find someone to kill the girl’s mother and a second accuser, from Peabody, to keep them from testifying against him, prosecutor Michael Sheehan said.

Smith was sentenced Monday to a total of 10 years in state prison, to be followed by five years of supervised probation, the result of a plea agreement accepted by Judge Thomas Drechsler during a hearing Monday afternoon in Salem Superior Court.

In addition to the solicitation to commit murder charge, and three counts of possessing child pornography, Smith pleaded guilty to indecent assault and battery and providing alcohol to a minor.

Members of the Salisbury police and the girl’s family were present for the hearing where Smith initially remained partially hidden behind the frame of a holding dock. There was no one in support of Smith in court on Monday.

The case started with a tip from the National Center for Missing and Exploited Children back in 2018, which led police to obtain a search warrant for Smith’s home in Salisbury. Smith’s email had been linked to a Tumblr account that was being used to download images of children, Sheehan said.

Some of the dozens of images and videos police later found on the laptop, an external hard drive, and, eventually, in 2021, after managing to unlock a cell phone, were of toddlers.

Shortly after Smith’s arrest was reported in The Daily News of Newburyport, the mother of the 14-year-old girl went to Salisbury police and told her about an incident on March 24, 2018, when she’d invited Smith over for dinner.

During that dinner, she’d let slip that her daughter had been in trouble for drinking and smoking marijuana.

While the mother was out of the room, Smith, 37 at the time, invited the girl to come over, Sheehan said.

A second girl later came forward with a complaint, but prosecutors later dropped that case. As part of resolving the case, they also dropped a rape charge.

Smith had been in custody for months when his attorney, Brad Bailey, persuaded now-retired judge Timothy Feeley to release Smith on $1,000 on the condition that he live with his mother in Danvers while the case was pending.

But days before Smith’s mother posted that bail, officials at the Middleton Jail learned of Smith’s efforts to find someone to kill the mother of the Salisbury girl and the second accuser, offering $30,000 to make the mother’s death look like a drug overdose and stage a hit-and-run to kill the Peabody girl.

An informant told investigators that Smith “wanted both girls taken care of.”

On the morning Smith was about to be released, he was charged again with soliciting a crime, murder.

Smith was given credit for more than 1,450 days he’s spent in custody awaiting trial, but will serve approximately six more years before he’s released on five years of probation.